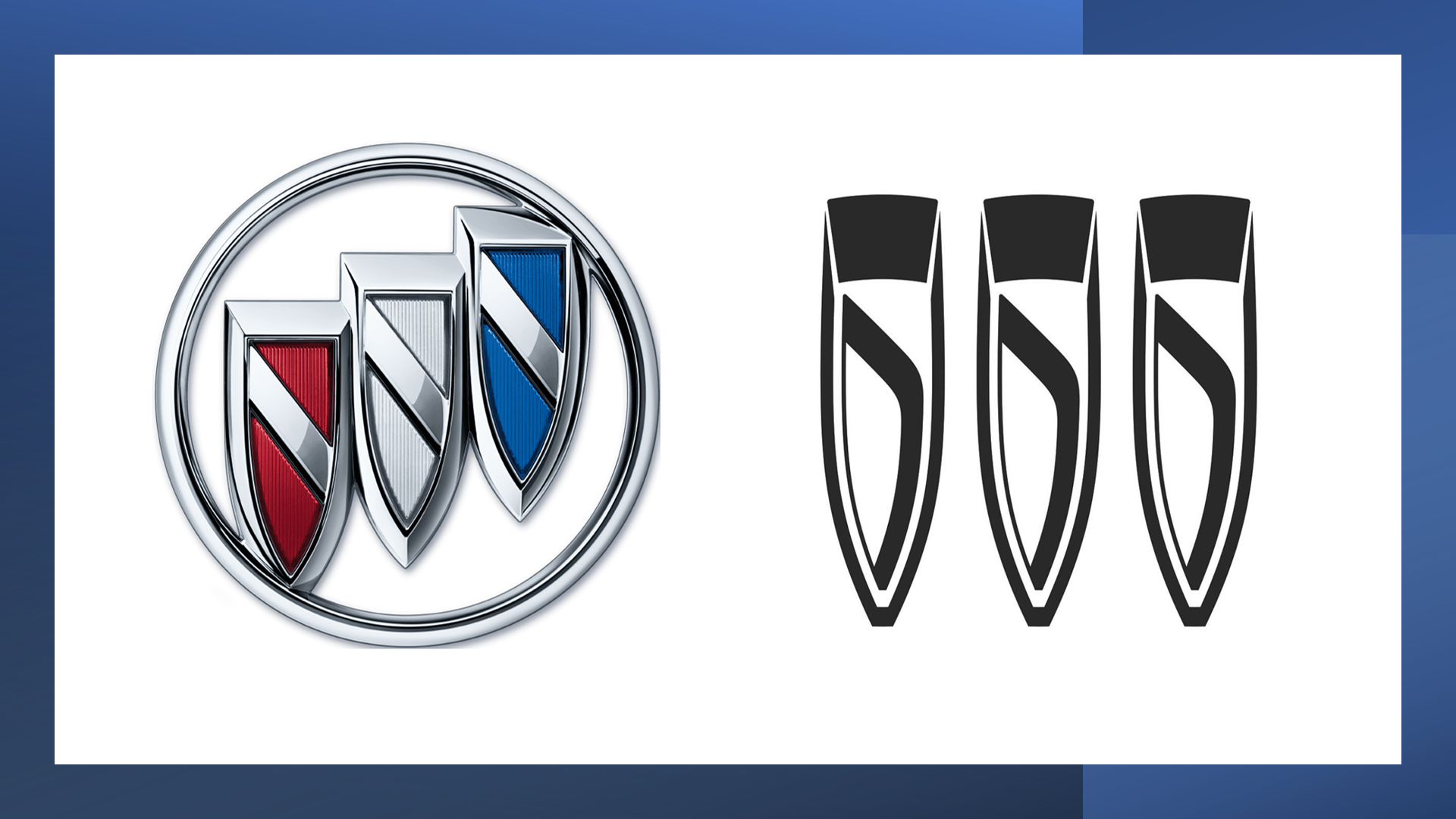 The automotive blog site, Motor1.com, recently uncovered a trademark filing from General Motors for a new Buick logo.  The new logo, shown in the picture above (right of the current logo), may be planned for a future Buick model.

No announcement has been made by General Motors, so it is hard to say when (or if) this logo design will be used on a vehicle in the near future.

The current “tri-shield” Buick logo was first used in 1959, with slight variations to the logo made over the years. It harkens back to David Dunbar Buick’s Scottish heritage, and positioned Buick as a premium automobile brand. 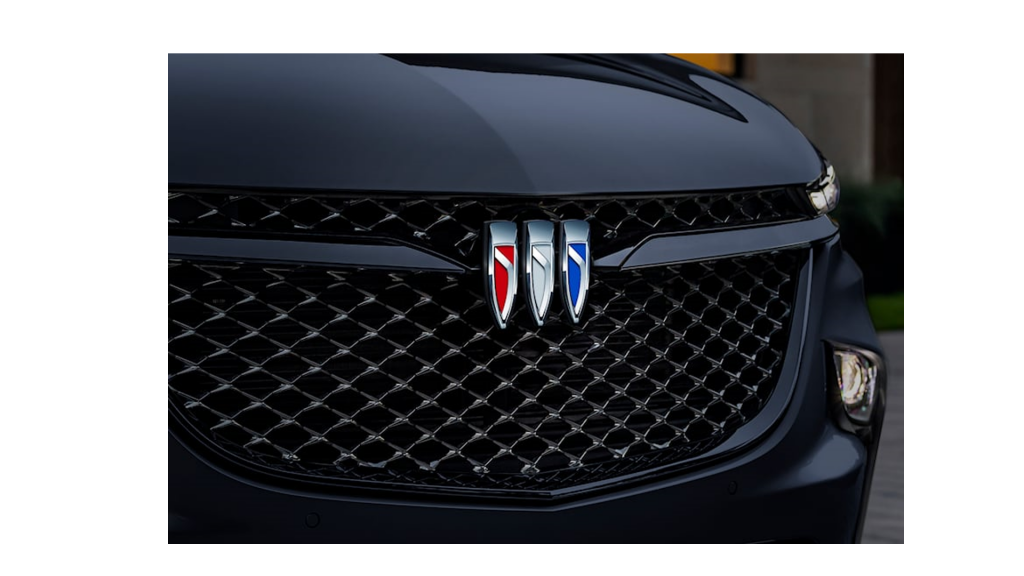 If this trademark filing proves to be the new Buick logo, it may be an attempt to change the perception of Buick.  The tri-shield logo is best known for its use on 1960s and 1970s land yachts for affluent customers–big, floaty luxury cars for doctors and dentists.

With the elimination of Oldsmobile (2005) and Pontiac (2010), Buick has been tasked to represent a sportier, European position in the GM lineup.  Unfortunately, it can’t shake the image from decades ago.  Will a logo change help?  Only time will tell.

Can a logo change the perception of a car brand?  Buick is not the first to make that attempt.  Cadillac altered their logo in 2014 and Chevrolet has been evolving the bowtie on a regular basis.

Even General Motors changed the corporate logo within the last year.  It was a huge change and created quite the buzz around their all-electric future.

I worked on the Saturn team from 1999 until we turned off the lights in 2010.  Some time aound 2006, we refreshed the Saturn logo to include a chrome frame around the logo.  A high level GM executive I’ll call “Bob” was following a Saturn car with the new logo on his way home from work.  He didn’t like the crisp edges to the chrome frame, so he ordered the logo to be revised with a beveled edge.

Big deal, right?  Unfortunately, we already started replacing the logo and signs at Saturn Retail Facilities, so those all had to be removed and replaced.  The badges already in production needed to be scrapped and new ones made for installation on future vehicles built.

In all, I believe it cost GM around $2 million to make the revision to the logo (on top of the original logo change expense).  Was it worth it?  The Saturn brand was one of four other GM brands targeted for elimination just three years later.

You be the judge. 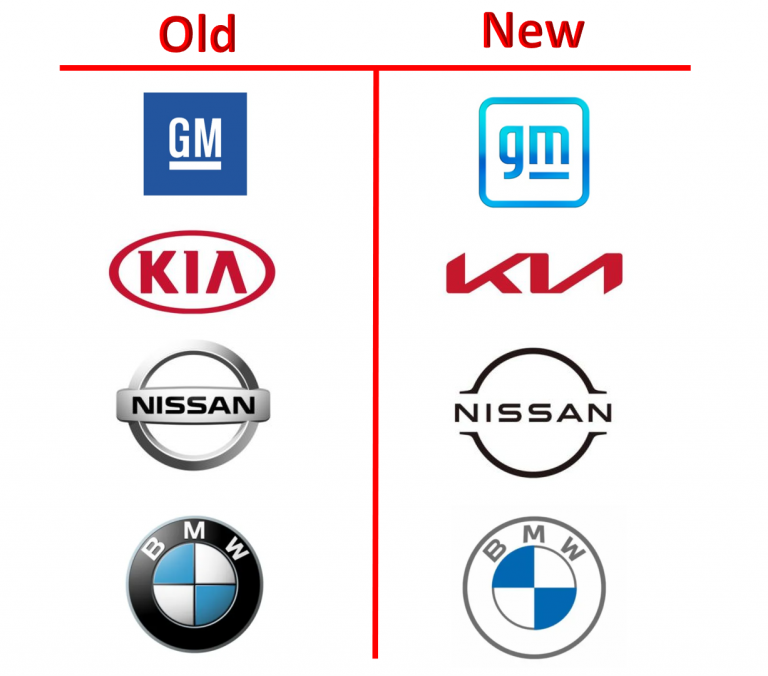 Within the last couple of years, other brands have changed their brand logo as noted in the chart above.  It’s interesting that Nissan and BMW went with a two-dimensional design, likely to give their brands a fresh, clean look.

Kia went in a totally new direction, which needed to happen.  Their current logo has been in place since their early days in the U.S. market, when their cars were cheap, boring and low quality.  Looking at their current lineup, you no longer see cheap, crappy cars.

The current Kia is full of high quality, beautiful designs with strong reliability.  They needed a totally new look, and their decision to change makes good sense.

It will be fun to see what happens with Buick.  Will they adopt the new design?  Will it change the perception of their brand?  Aging doctors and dentists are waiting to see.