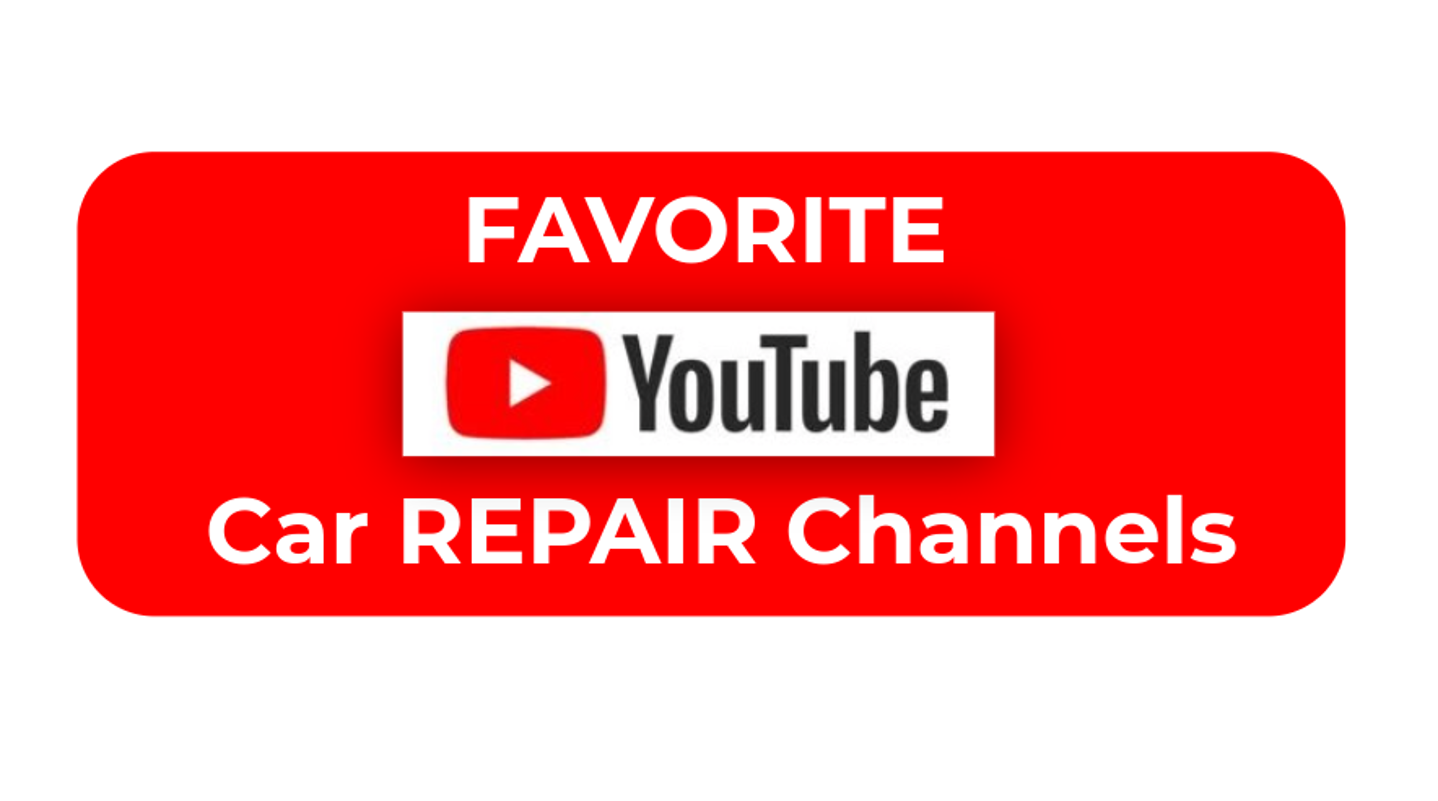 One of the best “how-to” resources found online are videos.  When I was just a young lad getting into automotive repair, I studied the shop manual for the car I was repairing.  These were great resources because you got good step-by-step repair instructions.  This was before the age of the internet so it was either read the shop manual, or find my dad for instruction.  Dad was a great teacher, so the first thing he taught me was to do it myself.

Now that we have online resources, “Dad” can be found in many YouTube videos.  Even with my years of experience, I still look for help when tackling a new problem.  As a result, I watch a lot of YouTube videos.  Not all YouTube channels are created equal, so I am happy to share my favorites ranked below.

At one time, the following channels were part of the list above.  Over time, their format has changed to be less about repairs and more about their shops and cars they are flipping.

The content on these channels is still fun to watch (and very much entertaining), but does not fit neatly into my REPAIR category.

This channel launched early in 2021, and I only discovered it about 3 weeks ago.  Ray works in an independent repair shop in Sarasota, Florida.  He publishes a video daily, and picks interesting repairs to highlight.

His videos are interspersed with dry humor and some really good diagnostic explanations.  He makes each repair look easy, which makes the videos fun and informative.

South Main Auto is a small three-bay repair shop in upstate New York.  The owner, Eric, shares the steps to repair cars that are in his shop.

He focuses on cars with common issues, which makes the videos relevant for folks like me and you.  Since it is located upstate New York, he deals with the same challenges as people like me in Michigan–RUST.

More importantly, he spends a lot of time on diagnosis–walking you through the logic of pinpointing the problem. I learn something new each time I watch his videos.

He has a dry wit, so his “editorials” are often on the sarcastic side.  Sometimes I feel like I am looking in the mirror.

One of my readers recommended this channel in the comments section below. I took his recommendation and watched at least a dozen of the videos on the channel.

Ivan, the channel host, runs an auto diagnostic and repair service out of his garage in State College, PA.  Most videos feature live troubleshooting of automotive drivability and electrical problems. In several cases, he drives to the customers’ home to perform his diagnostics.

Electrical work is my lowest skill, so I am learning a lot from Ivan’s videos.  The playlists are well-organized by categories and manufacturer for easy browsing.

Eric is much like South Main Auto–he provides a very thorough explanation of typical repairs.

His YouTube channel has a library of over 800 videos, covering everything from How-to Auto Repair, to Installing Vehicle Mods to building a killer Street Machine.

Most of his videos feature Honda vehicles (CRV, Element and Civics) from the early 2000s, but he does cover other makes as well.  Eric is calm and easy to understand in his approach.

1A Auto is an automotive parts store, with really good repair videos.  Their video library is well organized (a rarity among car guy videos) and both the camera work and narration make for a great experience.

There are no shortcuts in their videos.  If a procedure takes an hour, you will see the full hour.  If they run into a problem, they will show ways around them.

Their parts prices are not bad, but I still go to Rock Auto for parts whenever I have the time to order parts.  If I am in more immediate need, I go to my local AutoZone for parts.  They are terrific about backing their parts.

As I noted above, the following YouTube channels have been removed from the repair category.  The content is still interesting, but not 100% repair focused.

The host of this channel, Alex, is a former Mercedes-Benz technician and city of Chicago shop supervisor who recently left it all behind to run this YouTube channel full-time.

While touted as a “everything from car reviews, tutorials, racing, and most importantly cost associated with purchasing certain cars and their repairs,” I notice that most of the time is spent on the repairs.

I like the balance of topics and find Alex to be very engaging and informative.

Much like Legit Street Cars, John Ross (the host), gave up his day job to run his YouTube channel 100%.

John Ross recently bought a huge warehouse that he converted into a pretty cool shop. In the shop, he performs repairs on cars he plans to flip and helps friends with their cars. He also rents some of the space to a detail shop.

John Ross gets into some interesting projects an is pretty honest when he hits a snag.  This channel has really grown on me, which is why I added it to this list of favorite channels.

I discovered Car Wizard after watching another YouTube channel, Hoovie’s Garage (which by itself is an interesting channel devoted to buying and flipping vehicles).  The Car Wizard is the nickname given to David Long, the owner of Omega Auto Clinic in Newton, KS, after he helped Hoovie fix some of his oddball cars.

This channel does not go into depth on the repairs performed on vehicles in the shop (like the other channels above) as much as it is a narrative on the ups and downs of the vehicles brought to him for repair.

Car Wizard’s best videos are those where he will talk about vehicles to buy or not buy.  An example of that is the video Jeeps to Buy or Not to Buy.   His opinions are based on the direct experiences of trends he sees in his shop.

Whether you are new to the automotive world or an old pro looking for tips, any of these YouTube channels will provide you with excellent content.

I enjoy providing support to other car enthusiasts, especially young adults breaking into the field.  In fact, I support several youth automotive programs through the sale of items in the Vehicle Nanny Merchandise Store.

All proceeds go to a number of youth automotive programs.  I hope you can find a fun item for yourself that also supports our budding car enthusiasts.