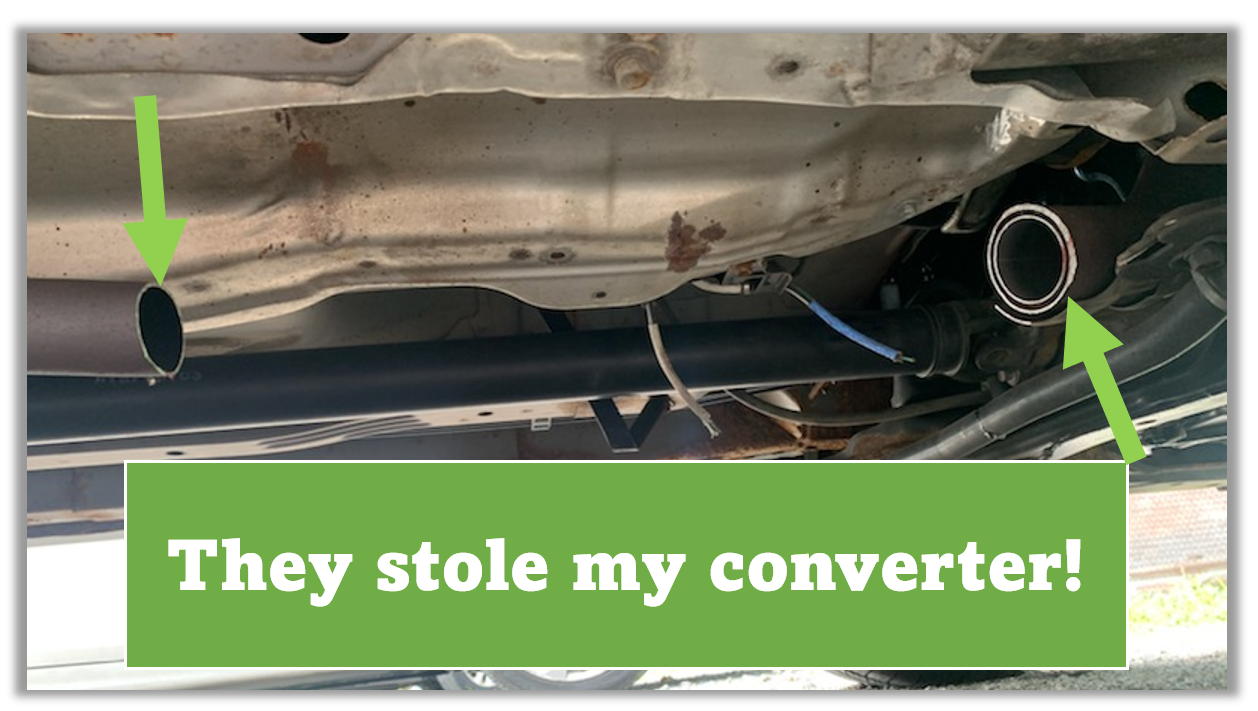 Catalytic converter theft is on the rise.  How do I know?  My son, Will (who just moved from Brooklyn, NY to Detroit, MI), just experienced this loss on his 2004 Honda CRV.  Welcome home, Will!

There is a reason this component of the exhaust system is so valuable to thieves.  Sadly, it is a significant cost and inconvenience to repair.

What is a Catalytic Converter?

The catalytic converter is part of your vehicle’s exhaust system.  It is typically placed in between your engine and the muffler, and some performance vehicles may have more than one.  It is designed to cause a chemical reaction with the carbon monoxide and oxides of nitrogen resulting from the engine’s combustion process into less harmful carbon dioxide and water.

The catalytic converter has been on most vehicles since 1975 as an emissions control device.  In those early days, they were crude and caused a big restriction in the exhaust system.  This is why engine power suffered in the late 70s.  Technology has improved to the point that converters are less restrictive and allow greater engine performance.

Why are they high theft items?

The insides of a catalytic converter is most often a mix of precious metals, mostly from the platinum group.  Platinum is the most active catalyst and is widely used, but is not suitable for all applications because of unwanted additional reactions and high cost (it rivals gold for price per ounce). Palladium and Rhodium are two other precious metals used.

After my son’s catalytic converter was stolen, I called a muffler shop to get a quote for repair.  I learned that theft from Honda CRVs (and Elements) from the mid-2000s is very popular because it is easy to get under these vehicles to cut it off and because Honda catalytic converters contain high amounts of Platinum.  Scrap metal dealers will pay up to $600 for a used Honda converter.

From what I discovered, Honda, Toyota and Lexus catalytic converters are the most popular to steal.

It only takes an experienced thief about one minute to cut out the converter on a vehicle like the CRV. Battery-powered reciprocating saws (aka Sawzall) make easy work of this task.

What happens when stolen?

A couple of things happen when the converter is stolen:

Repair is not cheap!

A thief will cut the exhaust pipe at both ends of the converter in order to snatch his prize.  That means you need to replace the converter, the pipe at the front of it, the pipe between the converter and the muffler and two oxygen sensors.

My muffler shop quoted me $2,300 to replace all of those components.  On a 2004 Honda, this comes close to half of the vehicle’s value.  Will could make an insurance claim for this repair, but chose to take advantage of the Vehicle Nanny. 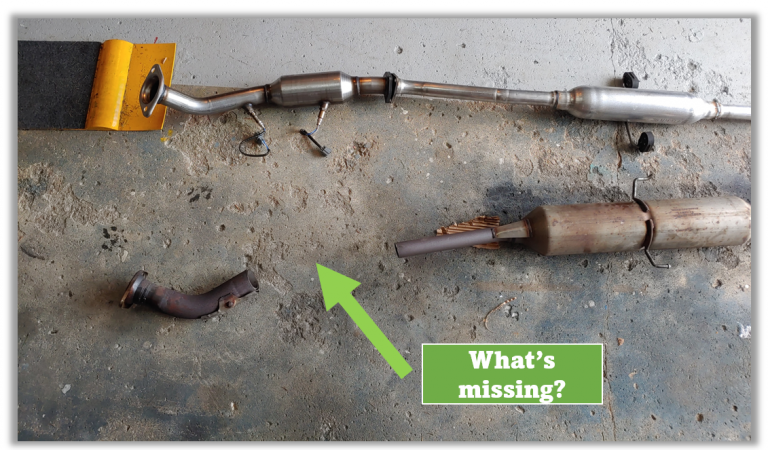 I was able to source parts from RockAuto.com and Amazon for a total of $476.  Working together, we were able to do this job within 90 minutes.  If we had to deal with rusted bolts, it would have been much longer.

I guess it was lucky that I just put a new exhaust system on this car less than a year ago!

Update 9/27/22:  The check engine light came on with a P0420 code.  This signals a low catalyst system efficiency.  I wondered if this would happen since we used an aftermarket catalytic converter.

Instead of buying another catalytic converter, I installed a spark plug anti-fouler on the downstream oxygen sensor.  This takes the sensor out of the exhaust flow, which fools the computer into thinking the converter was doing a great job.  Yes, it’s a cheat but at $7 (versus $800 for a good converter) it was well worth it!

Now that the Honda is back on the road, there is a fear that this theft could occur again.  I found some interesting ideas to make it harder for a thief to gain access to the converter.  Keep in mind, two things make this theft attractive–the value of the converter and short time to remove it.

Increase time to remove the converter

Time is a thief’s enemy.  The longer it takes them to attempt the theft, the less attractive the job.  I found a few products that might help discourage a thief: 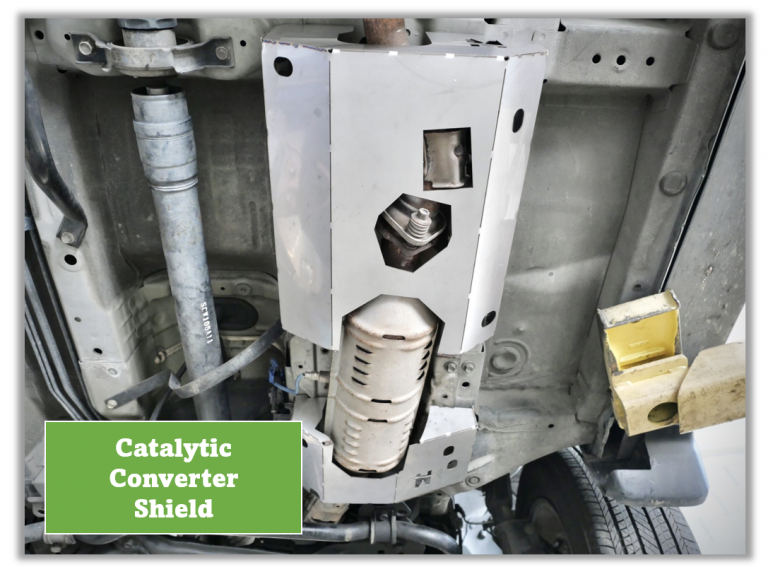 First, is a steel shield that fits over the catalytic converter, requiring time and extra tools to get to the converter. These can cost $200 – 600 to buy and install.  You need to weigh that cost to the cost to replace the converter and associated parts. 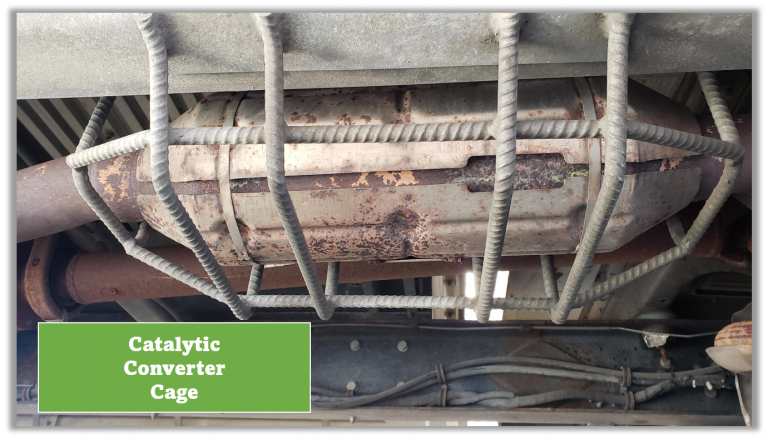 A cage made of rebar or other high-strength steel that’s difficult to cut is another option.  This DIY option requires some welding skill (or a friend with the skill). 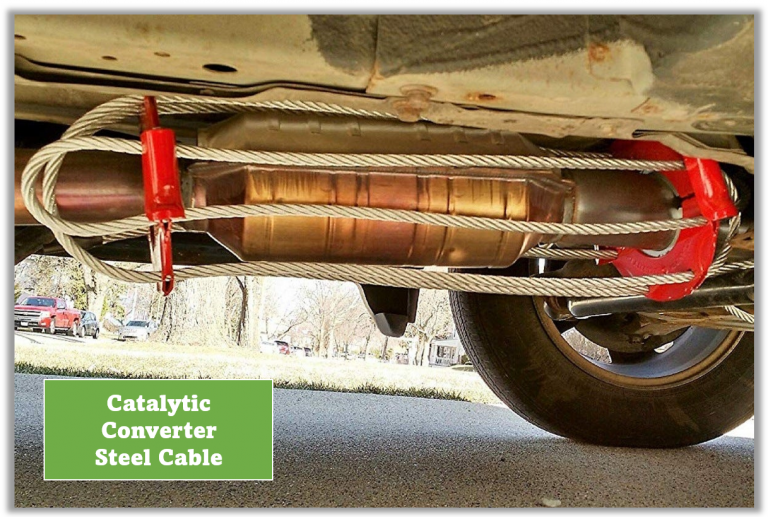 Stainless steel cables surrounding the catalytic converter, make it hard to cut off.  These are available online for around $175. 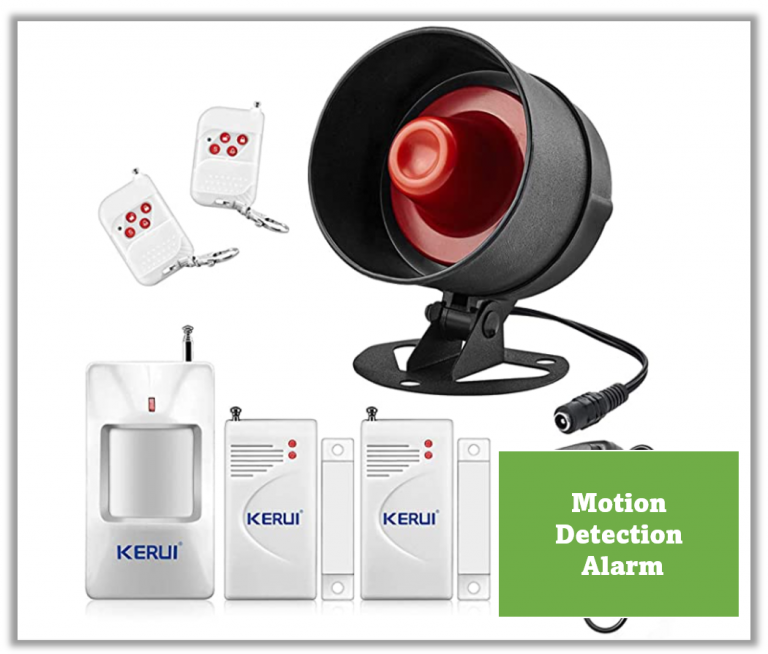 A motion detecting alarm doesn’t protect the converter, but if installed properly under the car, it may discourage a thief who dislikes working in a loud environment that attracts attention.

I actually bought this kit for $39 on Amazon and was ready to install it on Will’s car.  He had concerns that it would upset his neighbors if it was set off in error (if a cat walked under his car, for instance).

He opted for another method to detract thieves.

Reduce the value of the converter

When I talked to the muffler shop, they told me that an aftermarket catalytic converter does not contain as many rare metals as an original equipment unit, so their value is only about $10 to a scrap dealer (versus $600 for the OEM Honda part).

Will opted to buy an aftermarket converter because they are cheaper than the OEM model ($150 vs $800+).  He did not like the idea of spending more on various cages, cables or alarms, so he is banking on the thieves not wanting an aftermarket catalytic converter.  Since not all thieves are very smart, Will decided he would help by spelling out what type of converter he has on his car: 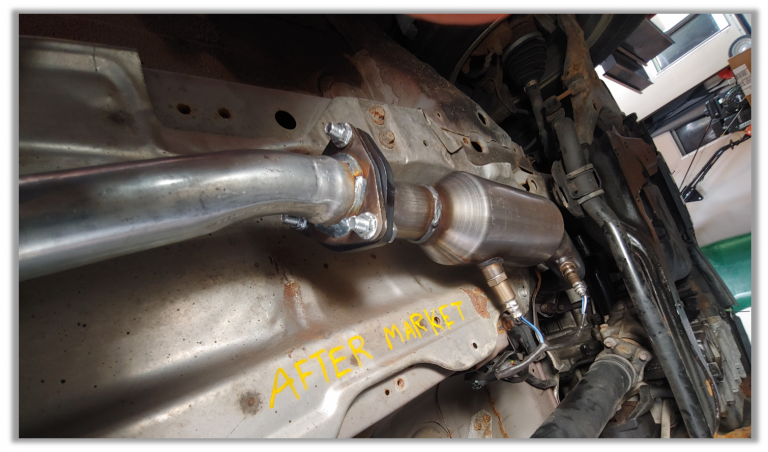 Time will tell if Will’s approach works.  If it doesn’t, at least we have the parts list ready to order again!  If nothing else, a would be thief may find the humor in this approach and give Will a pass!

This may not be a DIY repair for many of you, but I hope it gives you more awareness of catalytic converter theft and replacement/protection options.

I enjoy sharing these projects tips and other stories designed to inspire and educate young car enthusiasts (like my son, Will). Through the sale of items in the Vehicle Nanny Merchandise Store I am able to provide scholarships and donate to other youth automotive programs like those run by Hagerty Insurance.

All proceeds from merchandise sales go directly to these programs, so I hope you can find a fun item for yourself that also supports our budding car enthusiasts.