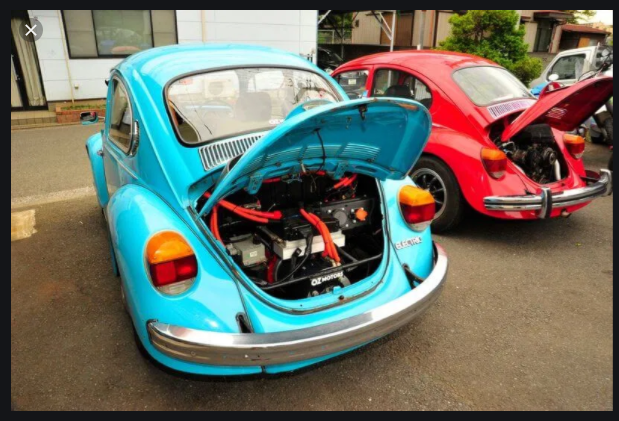 Over the past 10 years or so, the auto manufacturers (“OEMs”) have been flirting with building electric vehicles (EV).  The first real EVs came out in the late 1990s, when General Motors built an all-electric car (the EV-1). This was only leased through select Saturn Retailers in California and Arizona.  Around 2000, Toyota began selling the Prius Hybrid (part electric), which I credit with creating awareness and acceptance of electrified vehicles. Several OEMs are announcing plans to sell more electric vehicles in the coming years.  With this movement toward new EVs on the horizon, how soon before we see EV classic cars? Do they make sense?

What are EV Classic Cars?

As the name suggests, I am talking about older vehicles that have had their gasoline-powered drivetrains replaced with electric motors.  Gone are the smelly gas tanks, oil-rich exhaust fumes and that V-8 rumble. In its place, a high torque, rechargeable battery, electric powertrain.

Crazy to think about, but this is starting to happen in the aftermarket today.  How accepting is this? Reactions are mixed, however, people are starting to take it more seriously.  So much so that the debate begins as to whether EV converted vehicles still classify as historic vehicles.

I have been reading about this subject for the last couple of years and my initial reaction was “NO WAY!”  I did not like the idea of replacing the essence of an older collectible with some battery operated motor. It seemed sacreligous to consider!  After all, isn’t a carbureted, emissions-free engine the heart and soul of a classic/antique/collector car?

What’s next, modern suspension, wheels, tires and fuel injection?  Oh wait, that is already happening. Watch any car show on TV and you will see older vehicles getting these updates to the components under the skin of an old car, but the styling of the exterior remains.  These “resto-mods” (restored-modified vehicles) have gained widespread acceptance. It is the best of both worlds, right?

“The 53-year old Fédération Internationale des Véhicules Anciens (FIVA), which represents about two million enthusiasts in 65 countries, explained that electric conversions run afoul of its goal to preserve historic vehicles. It added that smell, sound, and driving behavior are part of the experience of driving a classic car. Swapping a Tesla Model 3 drivetrain into an old Beetle might make it quicker than a modern-day GTI and nearly maintenance-free, but that’s not what an air-cooled Volkswagen should be about.”

That’s a valid point, and I respect that a true collectible should represent the product in its original form.  Those purists have their place, but they are also the ones I referenced in my article “The Future of the Car Hobby” that may end up killing the hobby for the younger generation.

I’m really warming up to the idea of EV classics, and think EVs have their place.  They also have distinct advantages for people who only drive their collector cars during the summer, and only short distances.

For every collector car I have owned, my ownership experience went like this:

I usually only put 1,000 miles on my collector car during the summer.  The above points seems like a lot of work (and hazardous waste) for such a low usage.  Imagine a classic car with an EV powertrain would be like this:

This is an obvious over-simplification, but does raise the idea that EV powertains might be perfect for the collector car user.  I would miss the awesome sound of a V-8 engine (although Chevrolet addresses it in their concept later in the article), however, the convenience and high torque of the EV sounds pretty good to me about now.

I found some cool EV powertrain conversions for classic vehicles, with a future OEM offering on the horizon.  Check it out: 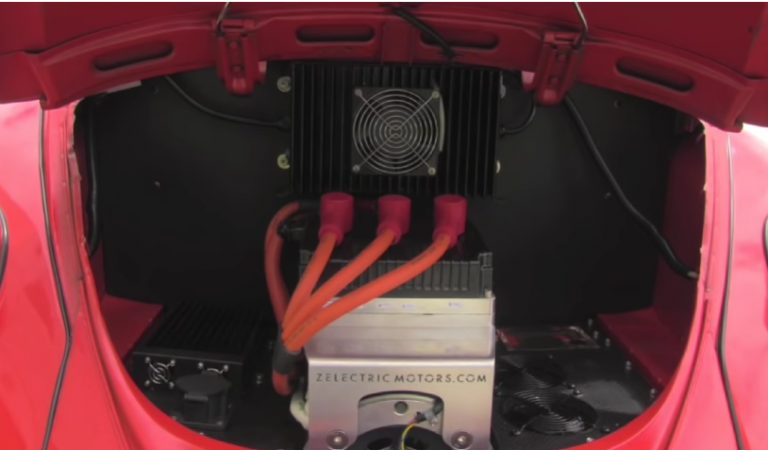 This is one of the first electric vehicle conversion companies I discovered for classic vehicles.  They provide a DIY kit for $7,500 or a full conversion in their shop for just under $17,000. They favor the old rear engine VW and Porsche models for their conversions.

Having owned a 1970 Beetle with the 40 hp gas engine, I can only imagine what an electric powerplant would do in one of these light little cars.  They produced a short video to demonstrate the packaging and performance of their kit. Click HERE to see the video.

While the cost to convert those cars seem a bit high to me, I bet it comes down over time.  I’m interested! 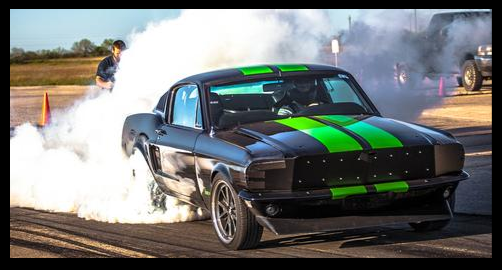 I was watching an episode of Iron Resurrection on Motor Trend TV recently, and they paid a visit to this shop to check out a 1968 Mustang that was converted to electric.  Unlike the EV West conversion that provided a modest increase in power and performance, the Bloodshed Motors’ “Zombie 222” Mustang produced 800 horsepower (!) from two electric motors.  Keep in mind the 1968 Mustang came with a 120 horsepower 6 cylinder, with a 390 horsepower 427 cu. Inch V-8 as the hottest motor.

I have no information about cost, as this is still in development.  They shared a video of their test run to 178 mph–it is so quiet and quick!  Insane! 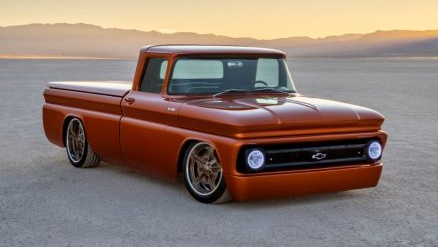 In October 2019, Chevrolet showed off their 1962 Chevrolet C-10 pickup with an electric motor conversion.  They renamed the truck “E-10” (see what they did there?). A press release from Chevrolet describes it as this:

“The E-10’s Connect and Cruise concept propulsion system is composed of a double stack of Chevrolet Performance concept electric crate motors (eCrate), two 400-volt batteries and a conventional SuperMatic™ 4L75-E automatic transmission. The double stack eCrate motor replaces the truck’s original gas engine under the hood and is connected to the automatic transmission, which transfers torque to the rear axle. Power to the drive stack comes from the pair of independent Chevrolet Bolt EV power electronics and two production Bolt EV battery packs. Mounted in the truck’s bed, each offers 60 kWh of usable energy under a hard tonneau cover.”

Earlier I mentioned the lack of the “V-8 Rumble” as one of the disadvantages of an electric powertain.  Looks like Chevrolet addressed that too–to fit in with other hot rods on the road, the E-10 has a sound emulator complete with three speakers to simulate an induction sound in the front and two banks of a V8 engine in the back of the vehicle. The driver can select one of five modes on the emulator, including: LS7 Z28 track tuning, LS7 Z28 touring turning, a V8 engine, a futuristic sound or silent – and the sounds will automatically adjust to the changing of the gears, truly mimicking an internal combustion engine.  They think of everything!

General Motors has been selling “crate” gasoline performance engines for many years.  While they will not confirm if the eCrate system will be available anytime soon, I think it is very likely considering the efforts they are taking to electrify their entire fleet within the next 10 years. 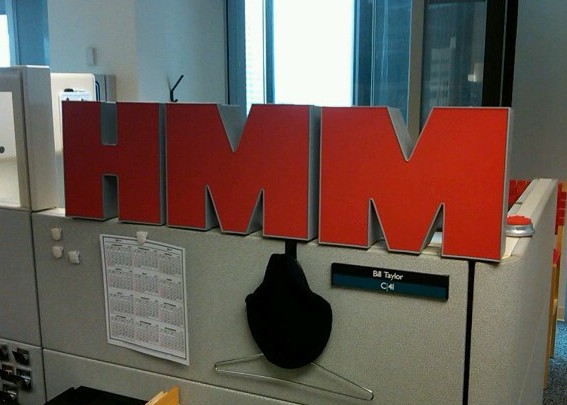 You remember the Hummer brand, right?  This was the brand that GM bought from AM General (the makers of the HUMVEE military vehicle) in 1998, and sold three models of Hummer–the H1, H2 and H3 before discontinuing the brand in 2010 as part of the bankruptcy settlement with the US Treasury.  While very cool looking and tough, the Hummer brand represented all that was wrong with GM at the time. Heavy, gas guzzling trucks that were anything but ecological. I loved them!

About a week ago, the Wall Street Journal reported that GM was reviving the Hummer name.  This got a lot of enthusiasts excited, thinking GM would finally have a Jeep Wrangler fighter.  As it turns out, they are not reviving the brand, just naming an upcoming all-electric pickup the GMC Hummer.

While this is not a classic vehicle, I did find it interesting that a defunct brand was being reborn as an all-electric truck sold by GMC dealers.  There are no further details about the vehicle at this time, so we will need to see how this plays out. I like the play on words with the Hummer name (don’t electric motors hum?).  Ironically, I worked on the wind-down of the Saturn and Hummer brands in 2010. I had the Hummer letters from one of their signs in my office and played around with the letters (as seen in this picture).  Maybe I had a vision of the future of this brand?

I am curious what my readers think of this idea of electrifying classic vehicles. I was not originally a fan, but the many attributes of the electric motor makes a lot of sense for vehicles that only get part time use.  I’m getting really charged up about the topic!

Please share your thoughts in the comment section below or by sending me a message at “Ask the Nanny.”