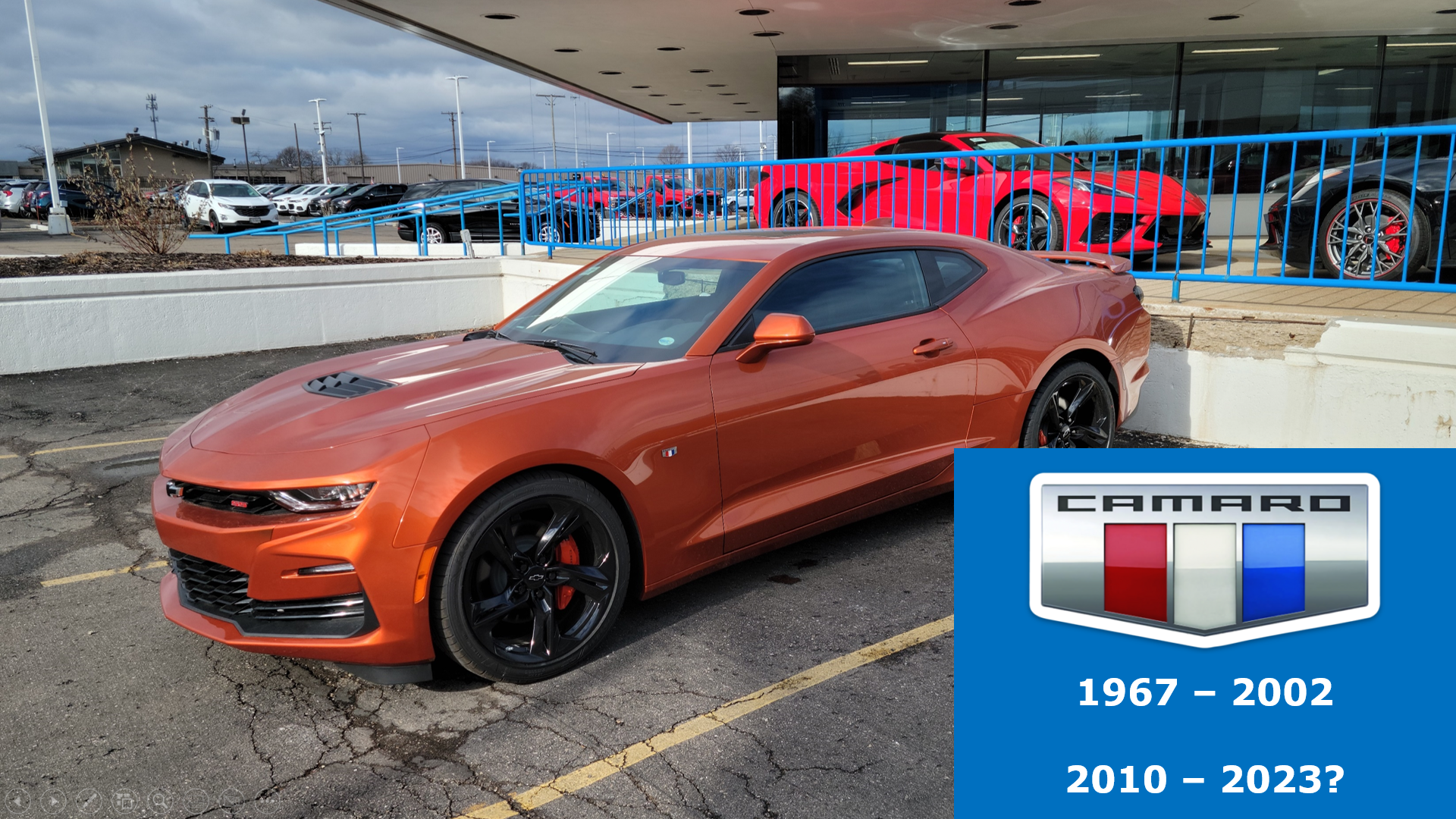 The Chevrolet Camaro holds a special place in my heart. With the exception of the current 6th generation, I have some history with each one.  That’s why it is a little sad to hear the rumors that this may be the end of line for the Camaro as we know it.

In a world obsessed with SUVs and pickups, two door sports coupes are a dying breed.  That’s really too bad, as nothing is more fun to drive than a road hugging coupe.  While not confirmed, it is believed the 6th and final generation Camaro will be built toward the end of 2023 as a 2024 model.

The more striking rumor from the GM Authority is that Camaro may become a sub-brand within Chevrolet, sporting an all-electric lineup.  This may include a 2+2 coupe and an SUV.  Does this seem familiar?  I wrote about the potential Corvette SUV and sedan in the article below:

What is going on at General Motors?

Camaro has enjoyed a long production run, with only a blank spot in the early 2000s.  My earliest experience was with my brother’s 1969 Camaro SS (Hugger Orange with a manual transmission).

My brother, Bob, is ten years older than me.  He bought a new Camaro SS in 1969 (it was my dad’s company car, so he got it at a discount).  Within a year of ownership, I accidentally pushed my mom’s 1968 Chevrolet Impala out of the garage and into my brother’s car.

That got your attention!  It was my first day of 3rd grade and I needed a ride to school.  My mom was running late, so I thought I would help by getting her car out of the garage.  I missed one important detail–how to stop the car from rolling out of control.

Luckily, my brother’s Camaro was parked in the driveway, so it absorbed the impact.  Only the driver’s door was damaged (it could not be opened).  I don’t remember much else about my brother’s reaction, but do remember my dad buying multiple doors to find one that fit.

When I was about to turn sixteen in 1977 and get my driver’s license, Chevrolet reintroduced the Z28 model to the Camaro lineup.  With the fuel and emissions challenges of the 1970s, this was a big deal.

I fell in love with that car, and talked my mom into a partnership on a 1979 Z28. The full story can be found in the two articles below:

Third Generation and Beyond

While I did not own any Camaros after the 1979 model, I drove a lot of them as company cars when I worked at General Motors.  That was fun, as I could order them any way I liked without having to pay for them.  What a deal!

When the fifth generation launched in 2010, I ordered one with the intent to buy it.  It was a moderately equipped six cylinder with a manual transmission.  I drove it as my company car, so that I could buy it at a deep discount when it came out of service.

This was during the time when GM was selling Saturn to Roger Penske.  I was going to lose my company car when I moved over to Penske Automotive.  When the sale fell through, I stayed with GM and retained a company car.  I untagged the Camaro and let it go to someone else.

Before I turned it in, I used that car to teach my son, Will, how to drive a stick.  We went to a local industrial park after hours to give him some room to roam.  He did a great job despite a pretty poorly designed clutch. 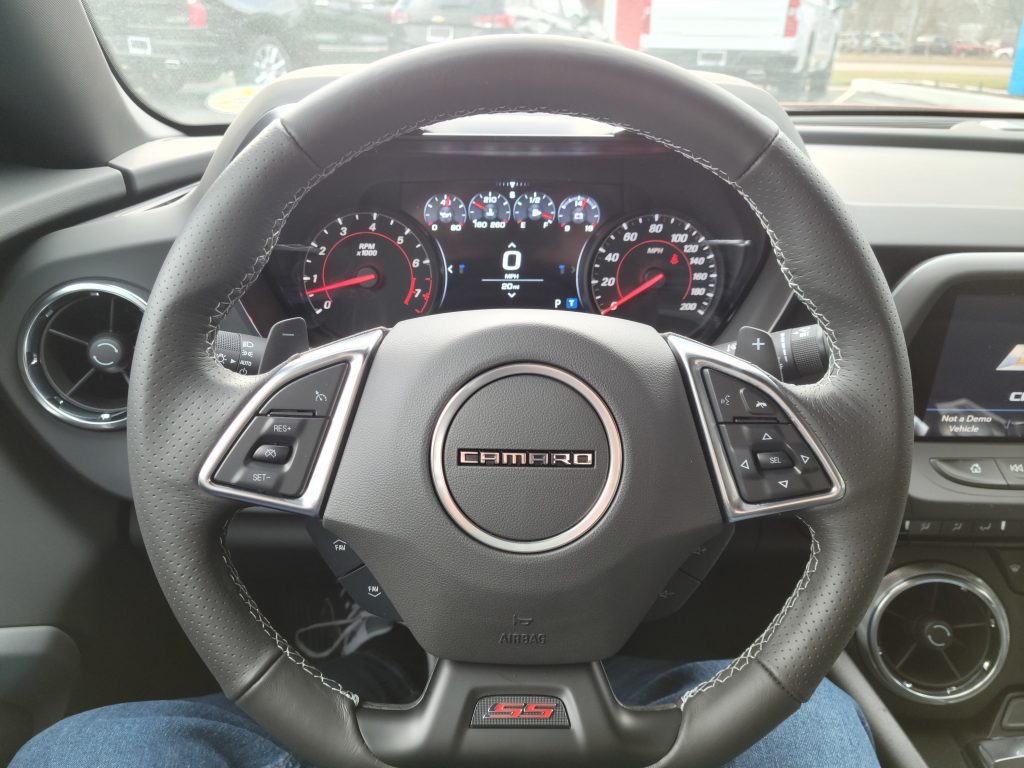 With rumors swirling about this being the last generation of the Camaro, I am considering buying one.  I just visited a local Chevrolet dealer to take one for a test drive.  I haven’t driven a Camaro since my 2010 company car, so I was curious about the changes made since that model. 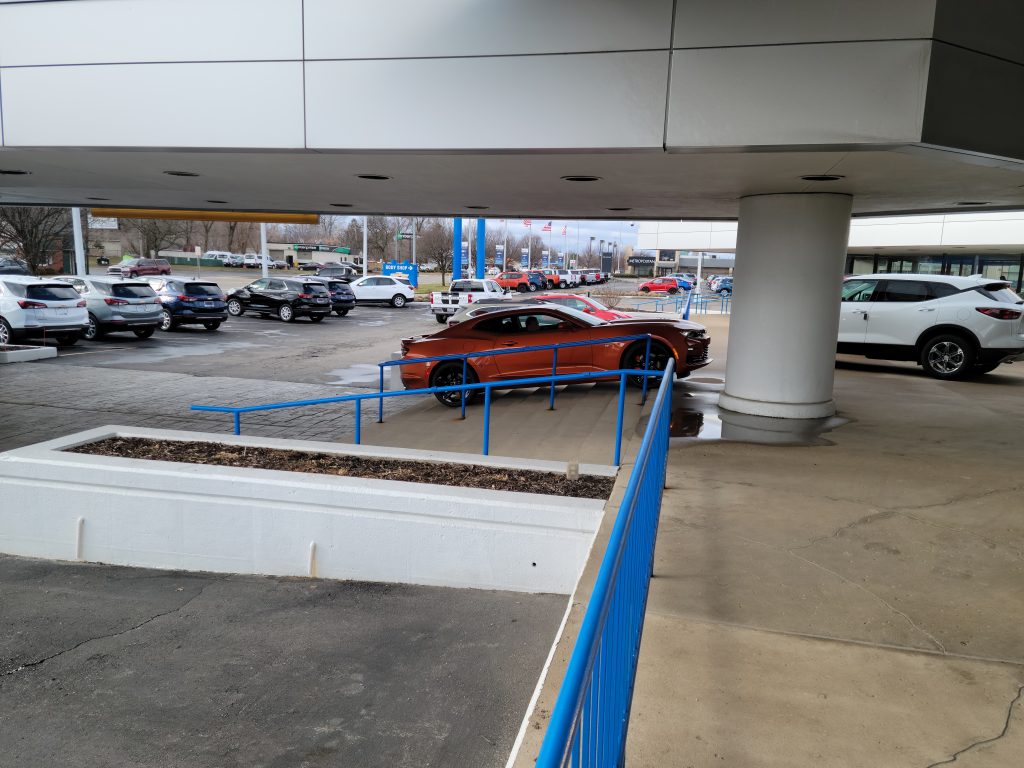 Gordon Chevrolet (Garden City, MI) is terrific to work with.  They only have three Camaros in stock, and those were all on the upper patio level of the dealership.  They drove an orange SS down the steps for me to take for a drive.  What an awesome car!  The 6th generation Camaro is a beast!

Sadly, the 6th generation has the same issue that plagues the 5th–poor outward visibility.  Looking through the windshield and the side glass is like looking through the slits in an army tank.  I recall my 5’2″ wife once said she felt like a five year old riding in the front seat of a car.  The high door panels are about even with her eyes.  This may be a deal breaker.

No decision has been made concerning a potential Camaro purchase.  If I do, I will order one to my specifications.  It’s been more than 40 years since my last one, so it needs to be right.

If I do buy a new Camaro, I better park it away from my brother.  Paybacks are a b!%$& and I don’t need him getting his revenge on me after all of these years!

Let me know if you have any thoughts or questions. Please email me at wct.billtaylor@gmail.com, or message me through the Vehicle Nanny Instagram or Facebook pages.