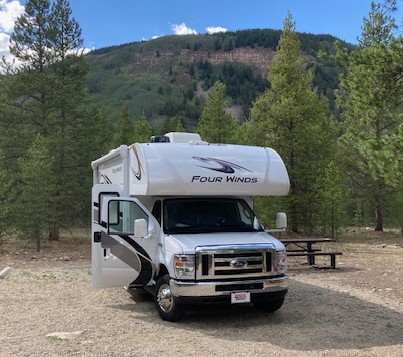 The journey continues as Gale and Guy are in the final leg of their trip to California to see their grand kids in their COVID resistant RV.  In this installment, the “stuff” is  getting real.  Guy and Gale share their important tips about campground planning and RV waste systems.  Hey, you didn’t think this story was all about wine and roses did you?

If this is your first time reading about their story, I highly recommend you check out parts 1 and 2 first.  You can get to them at the links below:

Part 2: Life on the Road

And now, back to the story…

This is a good time to give you an idea of how we prepared for this excursion.  We joined the auto club and used the AAA TripTik website.

There’s a campground search feature in the upper lefthand corner that identifies campsites by expense.  Don’t be put off if too few camping icons pop up initially.  The more you zoom in, the more campsites reveal themselves.   There’s a nifty feature that allows you to set how many hours you want to drive for each segment of your trip.  We set the max to 10 hrs, knowing that would get us to San Diego in 3 1/2 days.   We then looked for campsites 30 minutes either side of our 10 hour limit.

We researched every one of them and quickly found some offered little separation with your neighbors.  But most had the basics–50W/30W electrical hook-up, fresh water, and waste dumping (more on that later). It doesn’t hurt to call each campground.  From our Camp-a-way contact in Lincoln we learned things could get hairy if the Nebraska Cornhuskers were playing their home opener.

We arrived Saturday evening.  We decided to take our chances—-Covid and fearful Big Ten University Presidents did the rest.  We had a peaceful night surrounded by low-key families.   Planning was really fun and helped build the anticipation of the big adventure.   Gale also wisely realized a portion of our trip would end in the wilderness with no cell service.  Meaning no digital navigation aids!  She went to our AAA office in Birmingham MI and they printed up a bound version of our personal Triptik plan.

It really came in handy in the mountains when the cell service went spotty or non-existent.

A Pause for Pleasant Reflections

We’ve been pleasantly surprised that the landscape is not the boring canvas of corn fields we remembered as young people.  Or maybe our appreciation has grown.  The bean fields are turning gold, corn is tassled, and the road in Nebraska is lined with beautiful black-eyed Susans or something similar.  Even the windmills have a stately quality in their own high-tech way.   Ours is a beautiful country.  We see a lot of car haulers and are also reminded of how big Michigan’s economic footprint really is. 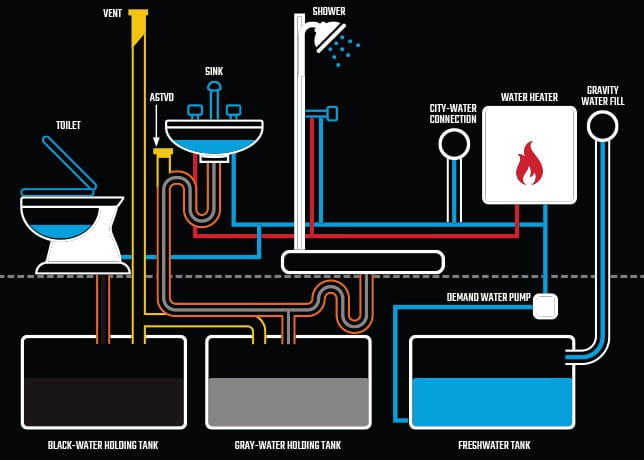 Now let’s set those pleasant thoughts aside and talk about human waste.  When you’re driving a mini-home with a mobile outhouse there are waste water responsibilities you need to know about.

Our RV is equipped with a clean water tank, a “gray” water tank, and a “black” water tank.  I can’t think of the latter without humming the Doobie Brothers.  For the uninitiated, the gray water receives anything going down the sinks or the shower.  The black water tank handles all solid waste and effluent from your toilet.  Both at some point require emptying.

This is something that kept Gale awake many nights.  She researched like a freshman cramming for finals.  There were stories of hoses running amok and spraying rookie RVers with…well, you get the picture.  She’s made sure we have a brick to hold the hose down as insurance.  She also was a dear and provided me (yes, I drew the short straw) with disposable plastic gloves.  Frankly, after she shared her dumping horror stories from the internet, I thought an expression of true love would be a Hazmat suit…or at least something with a hefty face shield.   Cue up “Living on the Edge” and let’s drain those tanks.

Gale found this nugget and It’s a great axiom to memorize.  While your hands (or gloves) are clean…connect your clean water.  In other words, when you arrive…connect your clean hose to the RV first.  As you’re leaving…disconnect it first.  Then go after the waste hose.

Ours is cleverly stored away from all of our personal items…hiding like a particularly evil snake in a square metal vessel above the rear bumper.   Rubber caps hold it in place but allow it to vent and dry.

It attaches easily, locking into place with a quarter clockwise turn.  The business end is then locked on to a similar universal male receptacle attached to the dumping tube…or if it’s just a plastic or clay crock, you thread the hose a foot in and lay your brick on top.  Some tanks empty with great force, causing the hose to pop out and gyrate like a mythical Greek Hydra…with only one head, thank God.   The brick should do the trick.

Black then Gray, You’ll be OK

Empty the black water first.  Our valve is a simple pull mechanism.   Don’t jerk it open…gently and gradually open it to keep the Hydra from defeating the brick and rearing it’s truly foul head.   Ours emptied easily and without incident.

There’s a reason your gray water goes last…it’s basically mildly soapy bath water and does a nice job of rinsing your hose of the ugly stuff that preceded it.  Again, no muss, no fuss.  Then after double checking both valves were closed, I replaced the hose in its bumper housing and carefully peeled off my gloves and disposed of them, before thoroughly washing my hands.

We’ll dump again at the sleep-spot before the last leg of our trip, and can hopefully arrive in San Diego with clean tanks.

Back to the Voyage

Heading through eastern Colorado the fields began rolling.  Farmers were using tiers in their fields to defeat erosion.  Crops turned to grasslands with herds of socially distanced cattle grazing across the plain.   Now and again, you’d see a lonely bull commanding his field.  We were moving at a nice clip on a beautiful piece of I-80, my side visor down to protect me from the sunshine that eluded us the day before.

After much poking about I found the Detroit Lions game on my XM Sirius app and was pleasantly surprised to find them with a slight lead over the Bears.  But as any Lions fan knows… trouble and odd luck are always lurking.

We were making great time when a foul stench hit my nose and it was unmistakable—-the smell of fetid waste.  “Jesus Gale!,” I said, screwing up my face in disgust. “Do you smell that?  Did our black tank rupture?”  We had hit some massive potholes before getting to the Colorado line and I thought maybe one of them had caused disaster.  My mind’s eye was picturing a river of yuck leaking into our beautiful home on wheels.  She burst out in highly inappropriate laughter for the situation we were in and pointed out the driver’s side window.

There, a few hundred yards from the roadside was a massive stockyard with several thousand head of cattle and apparently several hundred tons of cow waste!    Okay…my olfactory identification system was working just fine.  I just misidentified the source.  Our laughter lasted for at least a township and a half.

It does indicate, thanks to my lovely wife, I’m now as paranoid as she is about the black water we’re hauling.

Oh yes, and in the final quarter of the game, the Lion’s defense stunk even worse than the stockyard and they dropped a game they should have won. 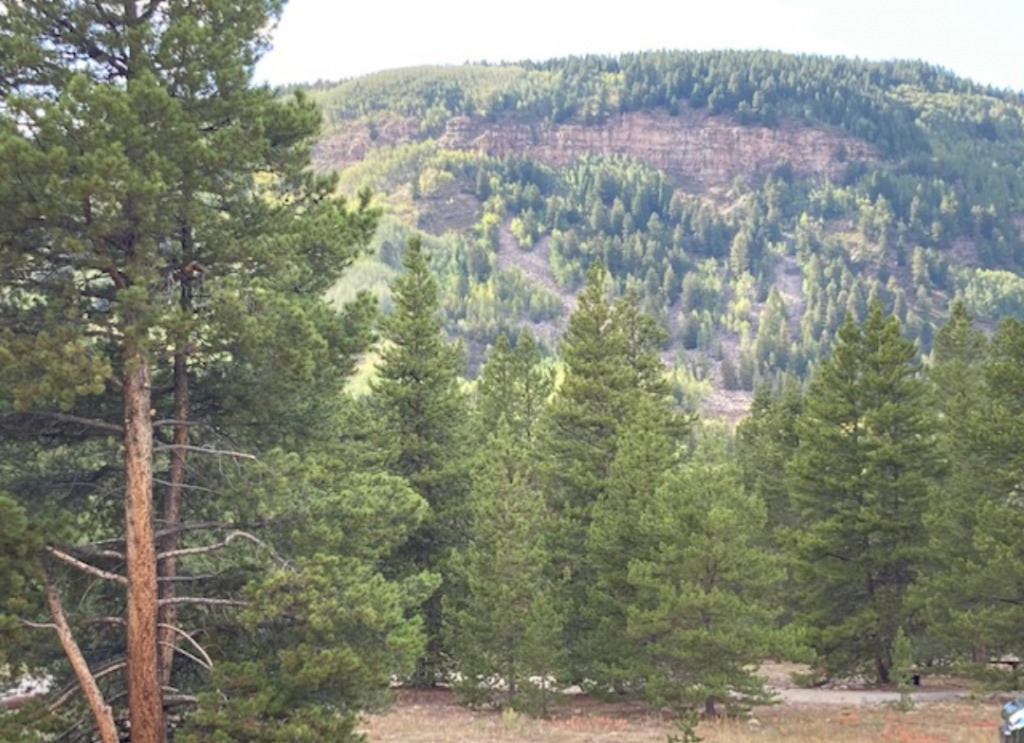 Meanwhile, back in Colorado

The silhouette of the Rockies began revealing itself about 50 miles out of Denver.  We were two hours away from a breathtakingly beautiful stop on our trip.

We took a 30 minute detour from our Interstate artery to spend the night nestled in a valley near Leadville, CO.  The Camp Hale Memorial Campground is a wilderness site on the former location of a World War II training ground for the Army’s 10th Mountain division.  The sites are widely spaced and you are reminded upon entering you are in bear country.   The pictures really don’t do it justice.  Just 5 days ago, the camp had 5 inches of snow!  It has since melted and in spite of the moisture we are still under a fire warning… so campfires are not allowed. 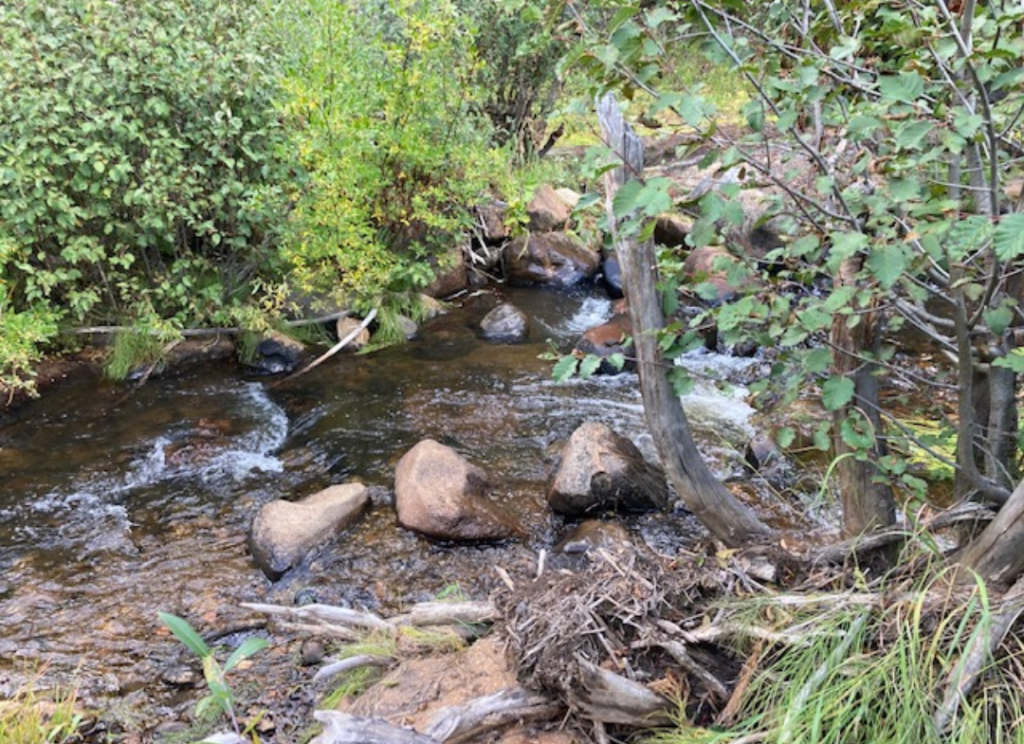 We took Addie for a long walk and found a quickly moving stream running through the property.  The dog got a drink and I stripped off my shoes, rolled up my pants and soaked my feet in this picturesque mountain stream.  While it did soothe my aching feet, it was also ice cold.  After two minutes I could stand it no longer and stuffed my barking dogs back into my shoes.

Gale apparently felt since we were heading into the wilderness she needed to cook and freeze enough food for a week.  God knows if we do get lost or run off the road, it will be the first time the rescuers locate victims who have GAINED weight during their calamity.

Tonight’s dinner in our mountain home was Gale’s famous Shepherd’s Pie.  After 6 hours of defrosting, it was still a frozen rock.   If we didn’t thaw it and eat it, I could have used it as a wheel chock for the RV.  With a little help from the microwave, assisted by the generator,  we dined as the sun set beneath the ridge of this stoney cathedral.  This stop was everything we dreamed it would be.   We put on an extra layer of clothing and went to bed, hoping we wouldn’t need to fire up the on board propane heaters.  Outside our window was a field of stars unblemished by light pollution.

This is a heavenly spot.