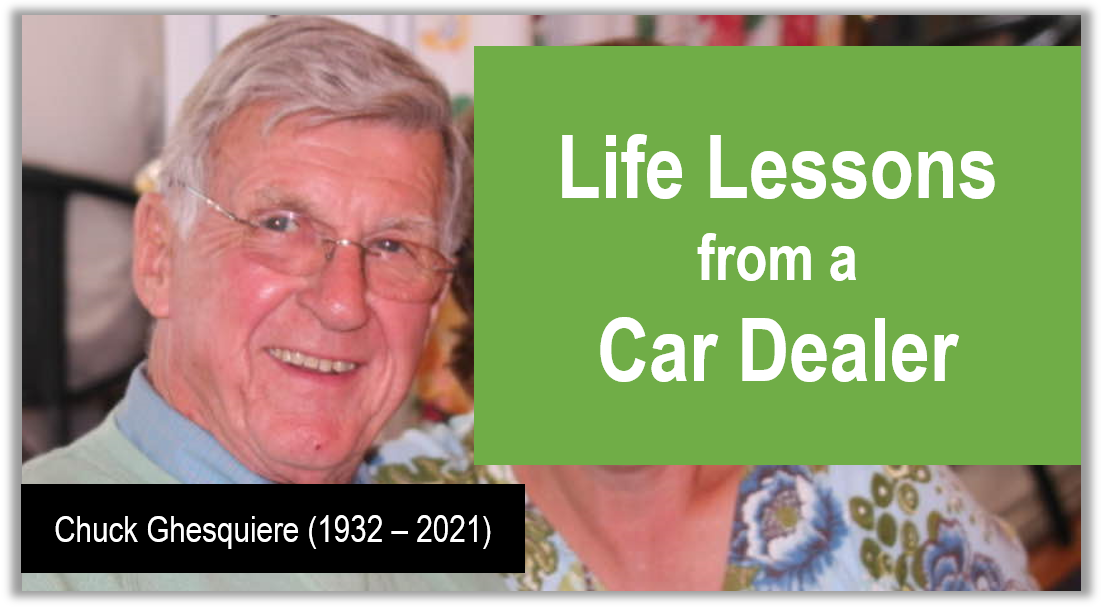 Throughout the nearly two years of VehicleNanny.com, I have shared stories about cars, how to repair or modify a car and the people who have connected with cars.  Not once have I talked about a car dealer or experiences at a dealership.  Many of my readers are contemplating an automotive career, and one step may be a job at a dealership.  If you are lucky, you will find a great one to work at.

I grew up in an automotive family (this was chronicled in my article, Who’s your Nanny?).  My exposure to this cool world started early in life, and got a big boost when I had a chance to work at a local Mercedes Benz dealership during a couple of college summer breaks. I learned so much from this experience–especially from the dealer principal, Chuck Ghesquiere.

Sadly, Chuck passed away this month after living a very full 88 years.  His passing and funeral service caused me to reflect on how he impacted so many lives.  Mine included.

Like many great people, Chuck was a graduate of Michigan State University (Go Green!).  Through his ROTC obligations, he entered the Air Force and became a pilot.  He flew humanitarian missions in Eastern Europe, where his devotion to service took root.

Once out of the Air Force, he followed his passion for cars by starting a lawn mower and small engine repair business.  Chuck believed building a solid foundation in a small business would lead to greater things down the road.  He was right.

From that simple repair business, Chuck became a Volvo dealer in Ferndale, Michigan in the 1960s.  At that time, it was tough to get a domestic franchise (GM, Ford and Chrysler) so he chose a strong brand with potential.  As he gained valuable experience with that brand, he got wind of a troubled Mercedes Benz dealership in Birmingham, MI.  By the mid 1970s, he bought that dealership and built a loyal following with customers and employees alike.  He earned many great honors from Mercedes and served as president of their dealer council. 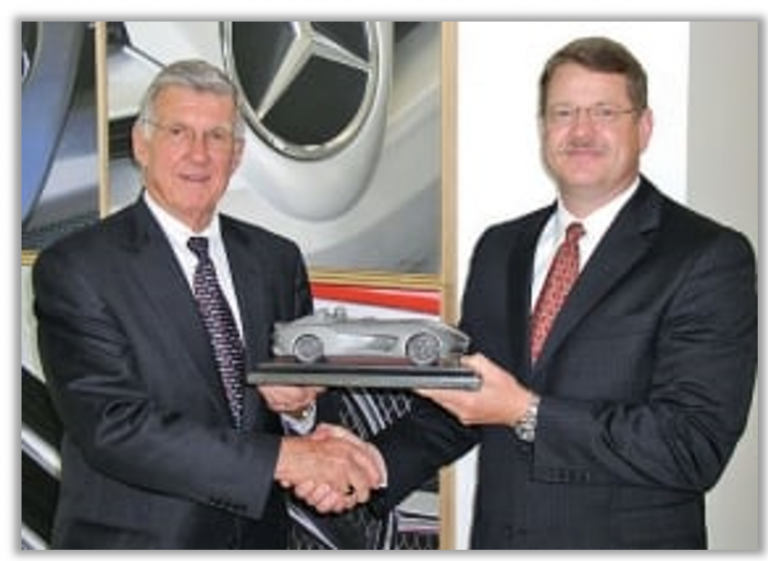 Over the years, Chuck opened three other dealerships (two Mercedes, one Cadillac) in metro Detroit with his two sons (CJ and Lee).  He moved the Birmingham store to Bloomfield Hills and used that as his headquarters until early this year.

I joined the Mercedes dealership in the summer of 1981 as a service porter and parts department assistant.  I washed cars, painted the shop, sorted parts when new shipments arrived and occasionally drove cars to other dealerships to perform “dealer trades.”  Essentially, I filled in for team members when they went on vacation.

It’s interesting what you learn from watching the operations in the back of the shop.  Some of these were by Chuck’s design, many from just being curious.  All of the lessons I carried into my professional life when I was making dealer contacts at Chevrolet:

Like many businesspeople, Chuck had strong ties to the community where his dealerships resided.  It was his nature to nurture.  Remember that comment above about earning and keeping loyalty?  A big part of that was earned by giving people a second chance when they fell down.  There might not be a third chance, but few needed them.

His love of family and children were fulfilled by supporting Cranbrook Schools for over 50 years and funding the Ghesquiere Family Center for Children’s Surgery at Beaumont Hospital (Royal Oak, MI).  This is a dedicated facility where children receive highly specialized surgical care in a family-centered, child-friendly place.  You can learn more about this program HERE.

His many outside interests gave him the same satisfaction he gained from work.  That balance is likely what led to his long, fruitful life.

If you are pursuing an automotive career, you would be lucky to work and learn from a dealer like Chuck Ghesquiere. The lifelong lessons gained are immeasurable.

I will miss my Uncle Chuck.  He was more than just family.  He was an inspirational leader and valued mentor.