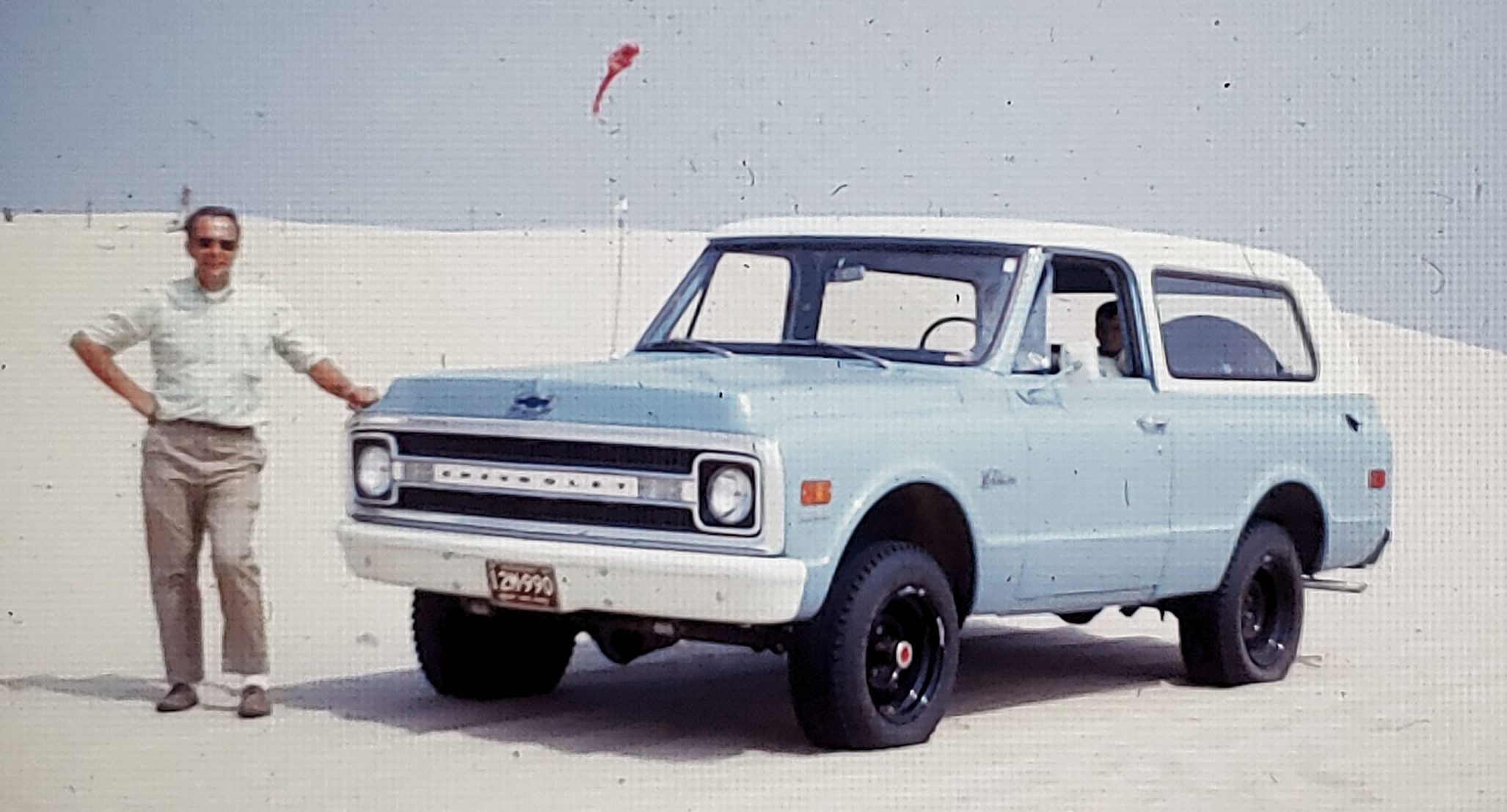 Some popular nameplates from automotive history have been making a comeback over the years, which can be both a tribute and a nice way to energize sales of newer cars.  Dodge has the Challenger and Charger (including a Demon package!);  Ford has kept the Mustang alive since its inception, and brought back the Bronco recently.  General Motors has the Chevrolet Corvette and Camaro (which took a hiatus from 2003-2009).

Then there is the Chevrolet Blazer. 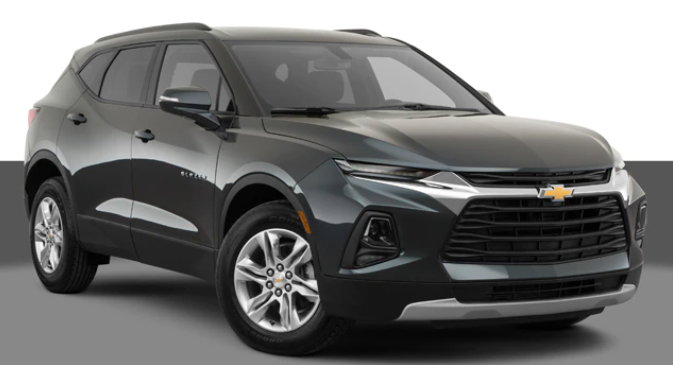 While the other nameplates noted above have remained true to their origins, the Blazer has evolved from a two door, off-road, body on frame giant to just another four door crossover utility vehicle.  The current Blazer (introduced in 2020) is a stylish, capable vehicle, but it is nowhere close to representing the roots of this venerable nameplate.

Let’s take a look at the original K5 Blazer, and its evolution over the years.  I think then you will see why Chevrolet missed an opportunity with the new Blazer.

The Blazer was a shortened version of the fullsize C/K pickup line (in Chevrolet vernacular, “C” designated two wheel drive trucks; “K” was four wheel drive) .  It shared everything between the front doors to the front bumper with the K10 pickup.  It also came with a removable roof, which allowed the Blazer to be a convertible pickup with a back seat.

My dad was one of the Chevrolet Engineers who developed the Blazer, and he remained the project manager until he retired in 1987.  When it was introduced in 1969, I was 8 years old and fascinated by this cool new truck.  For obvious reasons, my history with the Blazer is personal and deep. 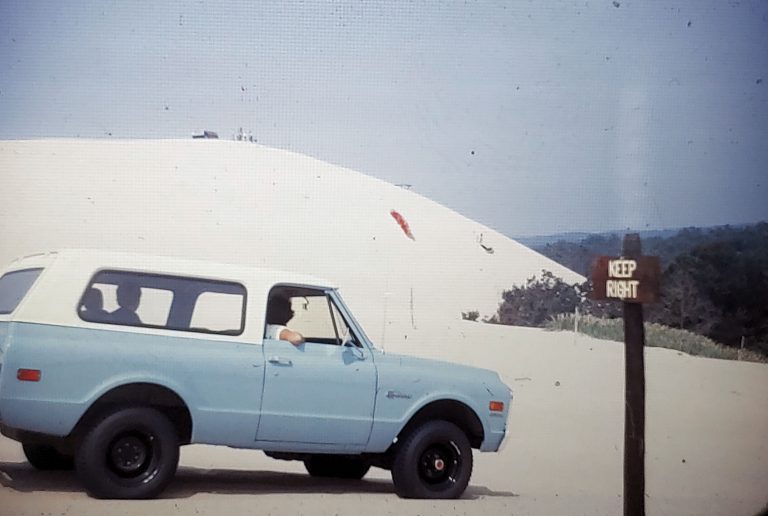 Fun on the Sand Dunes

In the summer of 1969, Dad proposed that we take a family vacation to the Silver Lake Sand Dunes on the west coast of Michigan.  Secretly, he wanted to see how the K5 would do on the dunes, since it was mostly dune buggies that attempted to traverse this challenging area.

Dad made several attempts to climb the big entrance hill into the dunes, but just could not get traction.  An older guy with a dune buggy approached us to check out the Blazer.  He noted Dad’s difficulty and quickly sized up the issue–we needed to deflate the tires to get better flotation.  Once we did that, we were off to the races!  Dad was a pretty happy camper, and I remember some pretty treacherous climbs on the dunes after learning this tire trick.  As you can see below, my Dad was pretty satisfied with the performance of the Blazer! 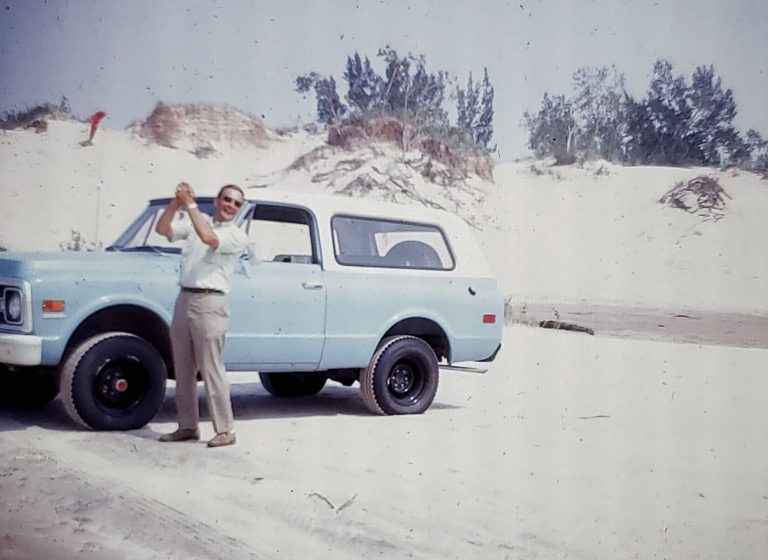 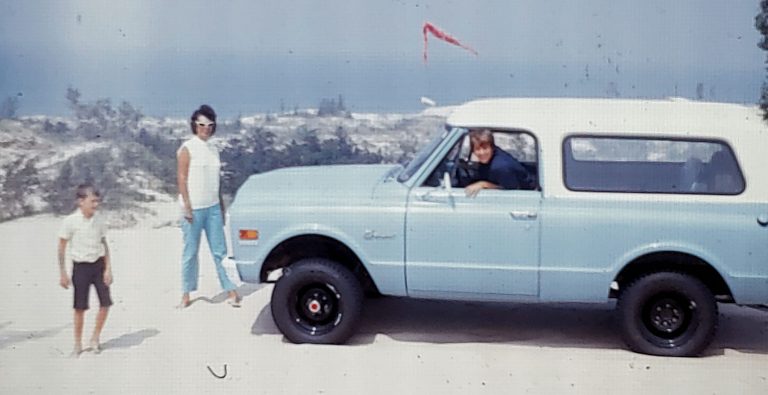 During the 1960s and 1970s, trucks did not enjoy the cache they do today.  Trucks were truly utility vehicles used for work and typically were not equipped with any luxury features (even power windows and locks weren’t available until 1978 in Chevrolet trucks).  That’s why the focus had to be on capability versus options. 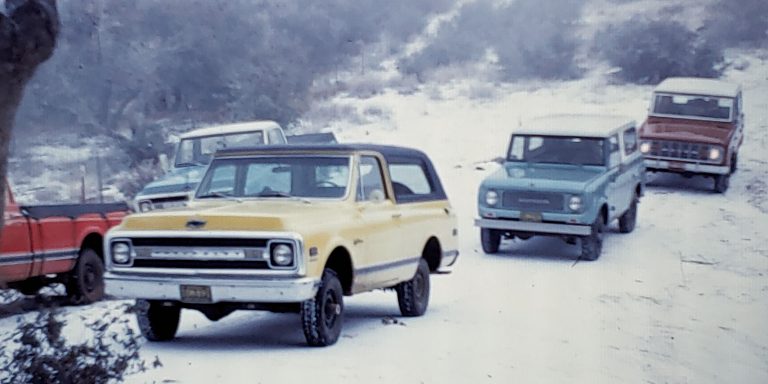 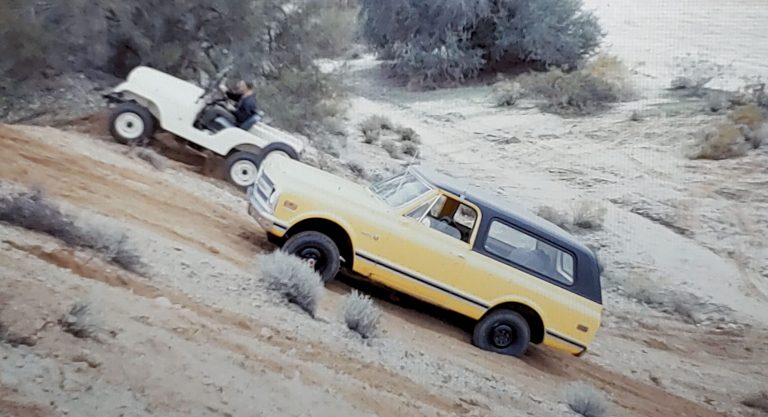 On that front, Chevrolet was serious about giving the Blazer true off-road chops.  Countless development hours were spent testing the Blazer against its key competitors–Bronco and Scout.  I recall my dad spending a lot of time at the GM Proving Ground in Mesa, AZ to develop Blazer’s off-road readiness in the Arizona desert.  He had a serious focus on the Blazer’s success.  It was personal for him!

As a result, it became personal for me as well.

In 1973, Chevrolet introduced the completely redesigned C/K trucks.  This included Blazer, Suburban and all pickups.  This generation of trucks became known as the “Squarebody era” by enthusiasts due to the more squared-off body lines.  Who says us car guys aren’t creative? 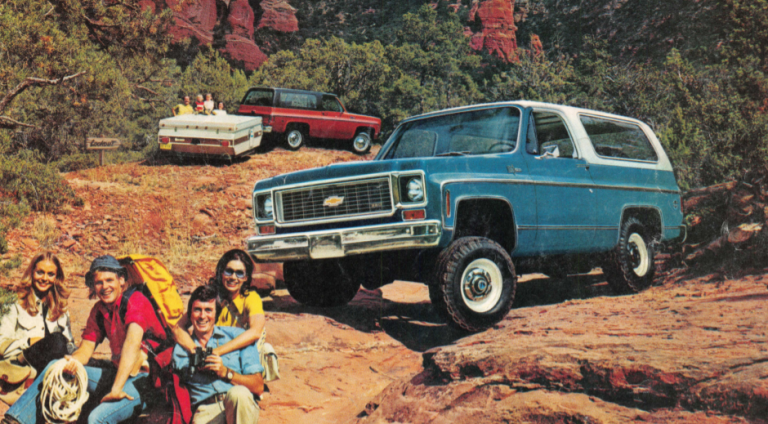 With this redesign came more refinement to all of the C/K trucks.  Blazer continued as a two door off-roader with a removable roof with some of the following upgrades:

The 1973-1991 K5 Blazers saw constant improvement throughout this generation.  Some of the more obvious like safety and emissions carried across the entire C/K lineup; however, Blazer did enjoy some of its own.

Beginning in the 1976 model year, Blazer received a significant change with the introduction of a steel “half roof” over the driver and front passenger.  A removable fiberglass roof was still available, but only for the rear of the truck. 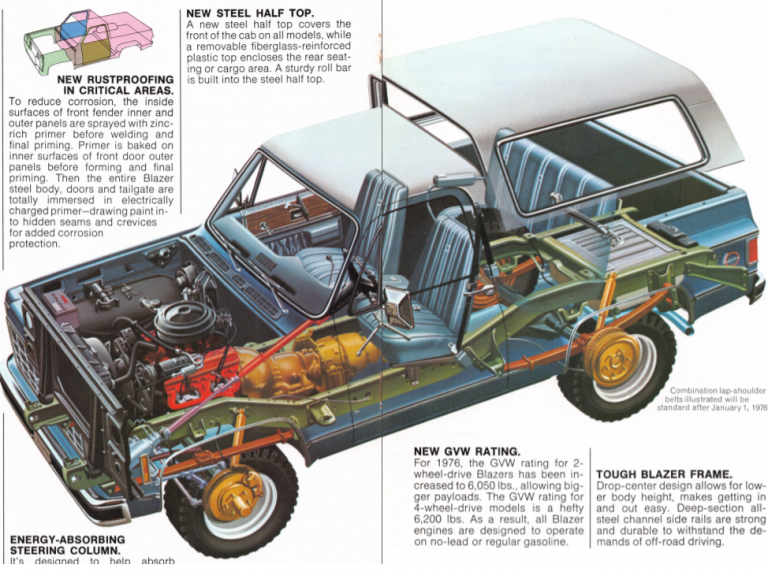 This new design did several things:

I guess Chevrolet was feeling frisky in 1976, as they introduced a special Blazer camper named the Blazer Chalet.  It combined the Blazer with a camper provided by Chinook. 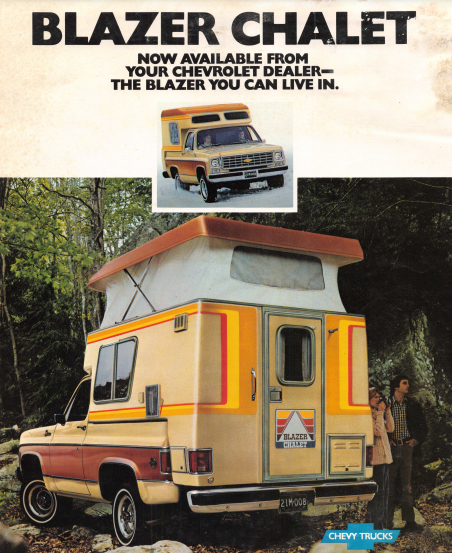 Chevrolet stated, “Blazer Chalet combines the toughness of a four-wheel-drive Chevy Blazer with all of the advantages of a complete camper unit.”

I remember my Dad doing work on the Chalet and bringing it home to test his changes.  The weight and placement of the camper unit, combined with the Blazer’s short wheelbase, seemed to present a challenge for ride and handling.  Also, they had to mount the spare tire on the front bumper which created engine cooling issues.

I thought this was a pretty cool rig (Dad said it would be perfect for deer hunters), Chevrolet dealers and field personnel were not as enamored.

An old colleague from GM, Lee Snyder, was a Chevrolet District Sales Manager in the 1970s.  He provided this perspective on the Chalet:

“In theory, it had appeal to a small niche market. I didn’t sell to my metro district dealers. A handful of my rural areas dealers had some interest and purchased my district’s allocation of Chalets. Unfortunately, just as dealer interest was growing the Chalet’s quality and service problems were quickly growing. The predominant customer complaints were water leaks. Operation in moderate, to heavy rain, led to very significant damage amounts of water intrusion.”

Another friend, Steve Clark, was a salesman at a Chevrolet dealership in the Upper Peninsula of Michigan.  When I asked for his thoughts, his answer was brief:

“OMG. We had one to sell at the dealership I worked at for 5 years. It took a long time to sell as it was priced more than a 3/4 ton pickup with a slide in camper.”

OK, so not all ideas make sense.  Regardless, I give Chevrolet credit for trying something different!

For the 1977 model year and beyond, it was becoming fashionable for trucks to have more luxury and convenience items.  This was a big deal as passenger cars still outsold trucks, and the niceties only appeared in cars.  That’s why these new features signaled the beginning of trucks’ acceptance as more than just work-ready vehicles:

It was fun to be around when all of these changes were taking place.  I was really lucky to have a Dad who shared his product development knowledge and experience with me.

I shared some of this in my recent article Home Movies:  1977 K5 Blazers.  I was 15 or 16 years old and used to shoot Super8 movies of these trucks back in the day.  That article contains those “home movies,” which is neat to see.  Well, it was neat for me! 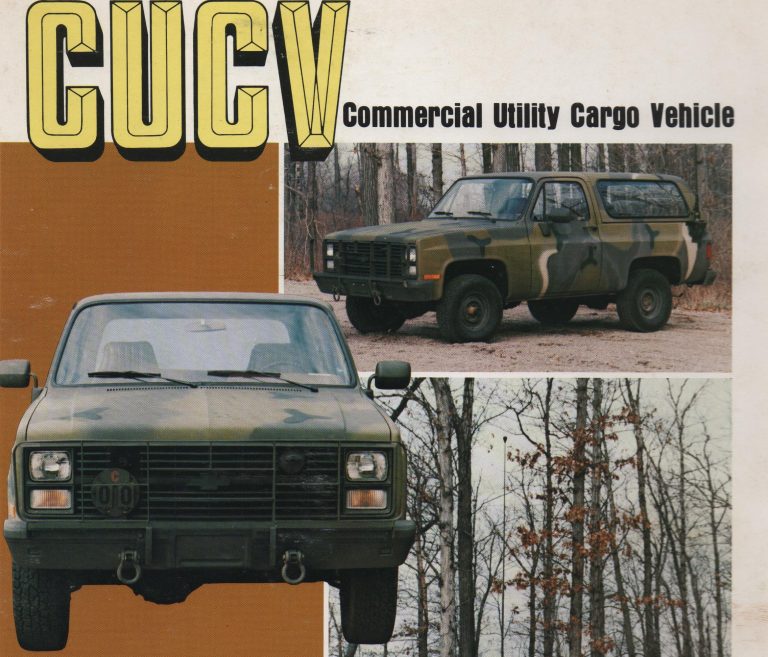 CUCVs were intended to perform “background” roles, providing support for frontline forces, such as cargo transport, troop transport, first aid, and communications. They were not built for direct frontline combat use.

The Blazer was one of those vehicles (along with the K-series pickup and chassis cab trucks).  It was equipped with a diesel engine, ¾ ton axles and a 24 volt electrical system.  Full specs can be found HERE in the spec sheet that was included in the CUCV brochure.

Beyond the Squarebody Blazer

The 1969-1972 Blazers created a great foundation for the Blazer brand.  The truck truly evolved in the next generation from 1973- 1991, and those years represent the Blazer as most of us remember and love to this day.  It went from being a utility truck to a bonafide passenger vehicle during that time.

The focus of this article is on the two generations of Blazer that were considered the K5.  Other Chevrolet trucks carried the Blazer name, but not all carried the same purpose as those originals from 1969-1991.

I feel it is important to mention them to help round out the Blazer history, but don’t want to upset the sensitivities of true Blazer aficionados. 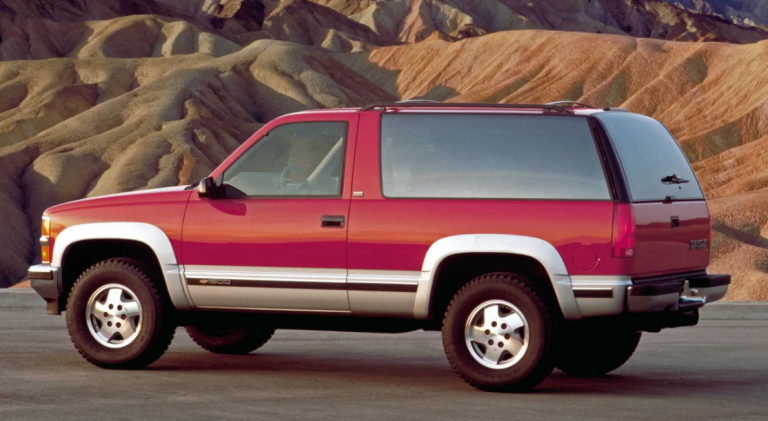 This Blazer/Tahoe generation was actually an extremely capable and comfortable truck.  It lost the removable roof found in the first two generations, but remained true to the Blazer name in most other aspects.

After the four door Tahoe was introduced in 1995, the two door version fell out of favor.  It was discontinued after the 1999 model year.

The Blazer carried on in a variety of ways.  From 1983 – 2005, the Blazer name was applied to the S-10 chassis as a fairly capable body-on-frame truck.  It was known as the S-10 Blazer for most of that time. 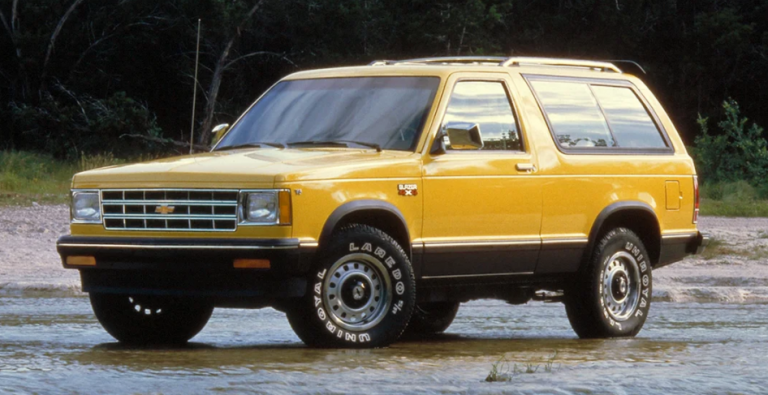 As I mentioned earlier, Chevrolet introduced a new Blazer in 2020–the first time the Blazer name was used in fifteen years.  Unlike the new Ford Bronco, Chevrolet went a different route with the Blazer.  It is a unibody, four door crossover utility vehicle with standard front wheel drive or available all wheel drive.  Chevrolet has hinted the Blazer carries several Camaro styling cues.  I can see that, with the angular body lines and interior dash design cues taken from the Camaro.

The new Blazer is a fine vehicle, yet I feel it should have been named something else.  The Blazer name deserves a more noble platform.

It also deserves its special place in history to be respected and admired.

The Blazer holds a special place in my heart, and I have so many fond memories of this truck.  That is what the car hobby is all about and why I am passionate about supporting the hobby for younger car enthusiasts!

I support automotive programs designed to inspire and educate young car enthusiasts through the sale of items in the Vehicle Nanny Merchandise Store.  All proceeds go directly to the Hagerty Automotive Youth Program, so I hope you can find a fun item for yourself that also supports our budding car enthusiasts.

A special t-shirt was created to tie-in to this story.  Check out the new RESPECT YOUR ELDERS shirt in the store today! 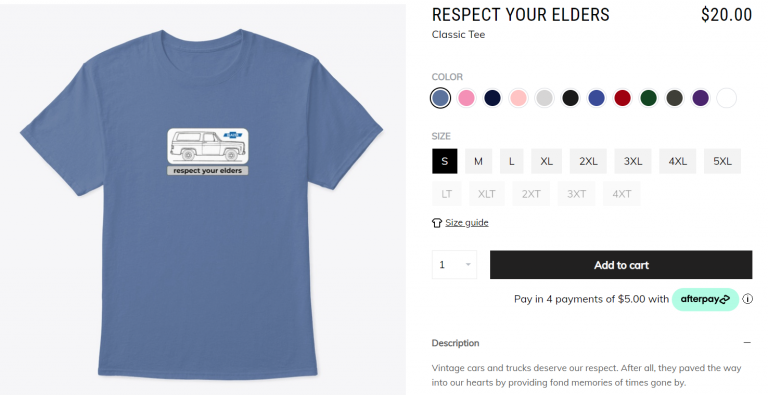