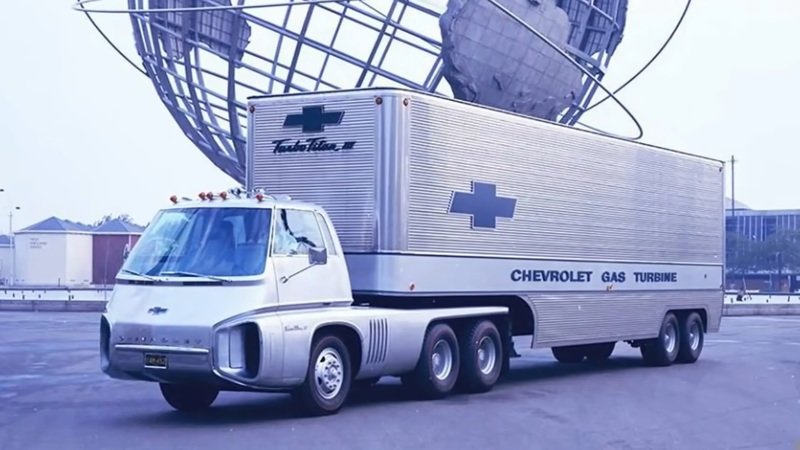 Experimental and concept vehicles from automotive manufacturers are usually just an exercise in design.  Many are built as show cars or “styling bucks” that have no functioning drivetrain.  These vehicles are meant to show the public the possible design direction of a brand.

The rare vehicle has both futuristic styling and high function.  This is the case of the Chevrolet Turbo Titan III from the early 1960s.

From the early 1950s, Chevrolet Engineering was looking at alternative means of propulsion for its over-the-road trucks.  Gas and diesel engines were generally reliable and low cost, however, a turbine engine provides an enormous 875 lbs-ft of torque running on any kind of fuel (the turbine preferred kerosene or fuel oil).  Very few engines today can achieve this power level, so it was very remarkable back in the day. 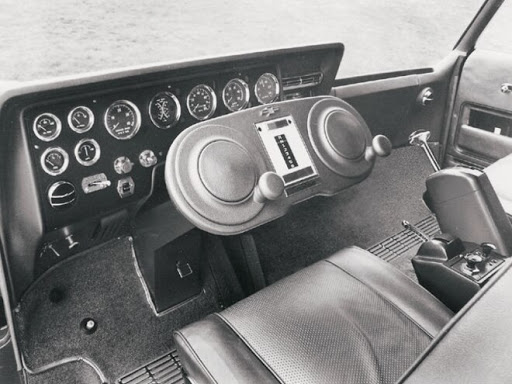 The fair symbolized a grand consumer show covering many products produced in America at the time for transportation, living, and consumer electronic needs in a way that would never be repeated at future world’s fairs in North America.  American manufacturers of pens, chemicals, computers, and automobiles had a major presence.

The Turbo Titan III was one of several futuristic vehicles that were on display at the 1964/1965 World’s Fair in New York.  You can imagine this was a big hit at the time.  This truck was pretty impressive for the 1960s.  Heck, it is impressive today!

I have been a big fan of the Turbo Titan III my whole life.  Pretty bold statement, right?  After all, I was only 3 or 4 years old when this thing went to the World’s Fair.  As it turns out, my dad was one of the engineers for this vehicle, and he was one of only two people qualified to drive it, due to its challenging drivetrain.

My dad passed away in 2014, but about a year before he died I asked him about this truck.  I saw an article online from a design student who was seeking information about it.  I wanted to respond, but only had faint memories of it.  The following quote from my dad in 2013 helps sum it all up:

“At the time Chevrolet was getting very serious about turbine engines. Although this was highly experimental. The key advantages were power and fuel economy and cheap fuel (Kerosene). The drivability was outstanding, however, the driver had to be extremely careful about monitoring turbine temperatures. The engine could not be used for braking as in internal combustion engines. I have no idea what happened to the vehicle. Since it was one of a kind, I assume they kept it in storage or scrapped it.

As an added thought the disc steering wheels (the truck did not have a steering wheel–it had two small discs in front of the driver), if you remember, I had them installed on a passenger car for evaluation in normal driving situations. This type of steering system was very novel at the time and required a lot of attention to normal driving. I kind of liked it but I do not think anybody else did!”

As a side note, I do remember my dad bringing home a car with that steering system installed.  He was pretty proud of it and showed our family how he could hand over the console to my Mom in the passenger seat to steer the car (the console was on a cable that allowed it to be moved around the cabin).  Looking back, it was the perfect system for my mom to be in control!

My dad is the passenger shown in many of the photos you will find online. He and one other guy drove it to the World Fair.  When they drove the Turbo Titan III into the show hall, the high temperature from the engine exhaust set off the sprinkler system. My Dad further noted that when they drove through Pennsylvania, they encountered a large hill that other trucks had trouble climbing. The Turbo Titan went over it “like nobody’s business.”

Going through my dad’s files the other day, I found a brochure that Chevrolet produced on the Turbo Titan III.  I scanned it and show all four pages below.  You can also download the full brochure HERE. 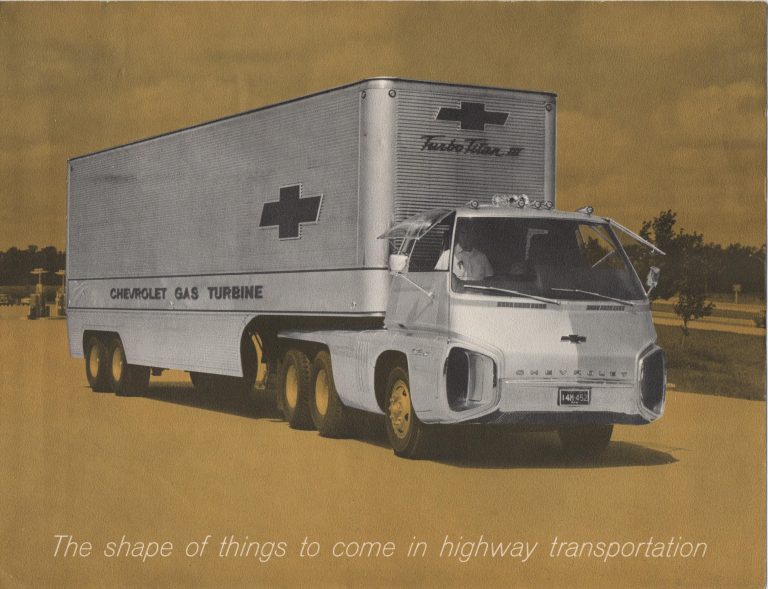 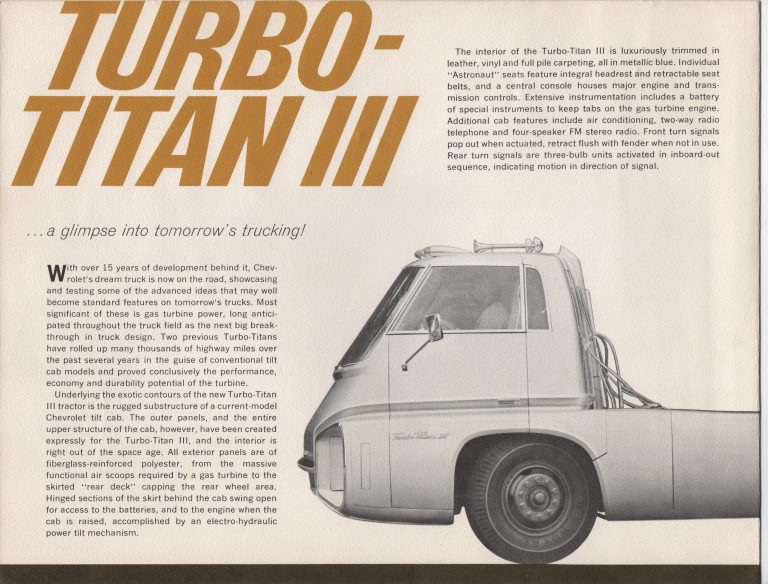 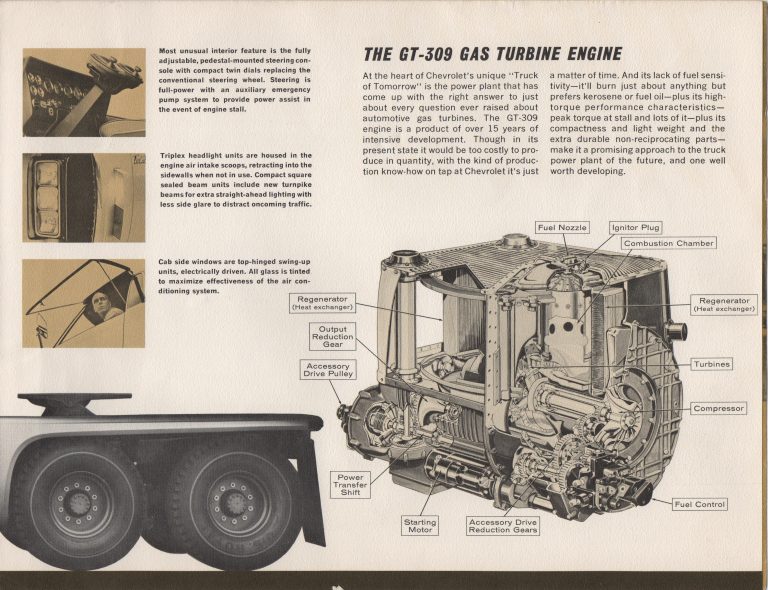 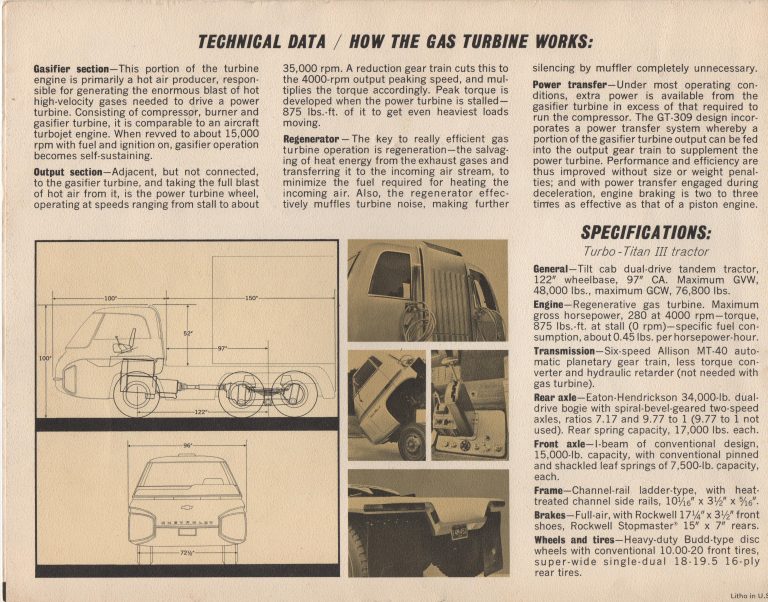 I also found a recent video on YouTube highlighting the Turbo Titan III.  The creator did a great job with his overview, so I would like to share it below as well:

I hope you found this little slice of experimental vehicle history interesting.  For me, unique vehicles like the Turbo Titan III bring the car hobby to life and help fuel the passion of car enthusiasts.

My hope is that this enthusiasm continues with younger car fanatics.  Whether it is career choices or extracurricular activities, this segment of our lives runs deep.   This is why I provide ongoing support of automotive programs designed to inspire and educate young car enthusiasts through the sale of items in the Vehicle Nanny Merchandise Store.  All proceeds go directly to automotive youth programs like those run by Hagerty Insurance, so I hope you can find a fun item for yourself that also supports our budding car enthusiasts.